Smashing the Duo-Normative Diarchy: Not Just for Homosexuals Anymore!

There have been many examples of trios of both gay men and lesbians who have fought against duo-normative oppression by polyamorous “marriages” between the trios. 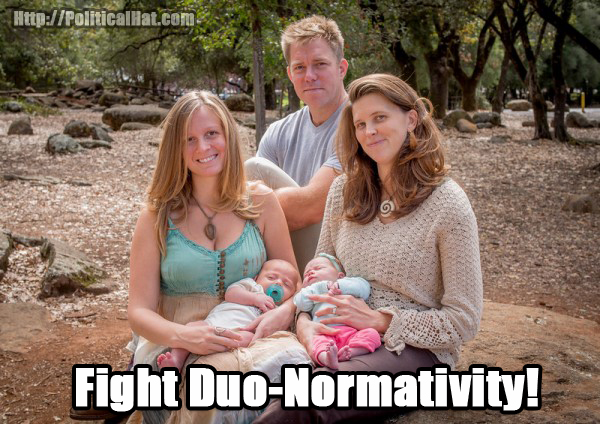 Now, heterosexuals and bisexuals are joining the vanguard of the revolution against oppressive duo-normative oppressors:

“Two women named Melinda and Dani Phoenix and the man they both consider their husband, Jonathan Stein, are in a polyamorous relationship and parenting two babies together under the same roof.

“Melinda and Dani began their relationship as a lesbian couple and became domestic partners in 2010. A year later, Jonathan joined them as the third partner and the three married last summer in a ceremony that is not legally recognized.

“Now they’re sharing their story to raise awareness about polyamorous families and hope that some day these arrangements can be widely accepted and legally recognized. With children entering their picture, they feel gaining support from the community is more important than ever.”

Note that this isn’t traditional polygamy where a man has two wives; this is a situation where each member of this tripartite marriage is equally involved with the other two.

If the sex of the people involved in a marriage is irrelevant, than by what legally sustainable reason is there to deny a marriage with three or more people?

Alternatively, who is to say that the biological drive to find a soul-mate is, much like the drive to engage in procreative activities with someone of the opposite sex, a “social construct”?

Heck, if two parents are better than one, who is to say that three isn’t better than two.

Moreover, this trio involved gives the child both a father and a mother (as well as another mother).  This is called “diversity,” right?

2 Responses to Smashing the Duo-Normative Diarchy: Not Just for Homosexuals Anymore!