The New York Times declared that Scott Walker, who assumed the Governorship of Wisconsin in 2011, caused through his governorship the firing of teachers in… 2010.

“Mainly, though, The Speech was about waging war on public employee unions, particularly the ones for teachers. ‘In 2010, there was a young woman named Megan Sampson who was honored as the outstanding teacher of the year in my state. And not long after she got that distinction, she was laid off by her school district,’ said Walker, lacing into teacher contracts that require layoffs be done by seniority.

“All of that came as a distinct surprise to Claudia Felske, a member of the faculty at East Troy High School who actually was named a Wisconsin Teacher of the Year in 2010. In a phone interview, Felske said she still remembers when she got the news at a ‘surprise pep assembly at my school.’ As well as the fact that those layoffs happened because Walker cut state aid to education”

How could Scott Walker affect through his governorship events that occurred before he became governor? 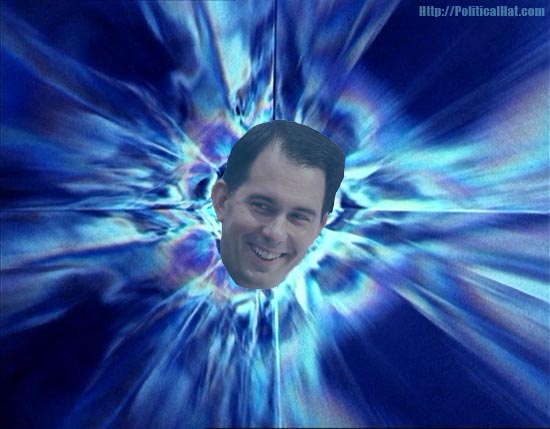 But how can we surprised, when Barack Obama declares the ability to transcend space and time, or when former Nevada State Treasurer (and 2014 election loser) Kate Marshall declares that events in the 1830’s caused the War of 1812, which was only solved by an 18th Century Secretary of the Treasury…