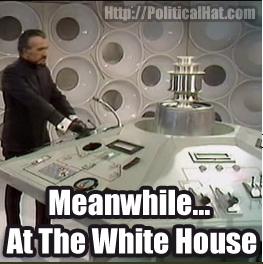 Obama has apparently revealed that he has the capacity to not only travel forward in time like us mere mortals, but to go backwards and even sideways!

President Obama: "We are here today because we know we cannot be complacent. History travels not only forwards, but backwards and sideways."

He is clearly not the only one who can grok the concept of backwards flowing time:

So, clearly, Democrats like Obama and Kate Marshall should be in charge because they understand how causality can be temporally reversed… along with the polarity of the neutron flow, presumably.

But Obama can see far beyond mere linear time, and can even go sideways!  Clearly we, who are not capable of seeing into parallel universes, could never understand the nth dimensional chess Obama is politically playing!