A Slovenian “philosopher,” Renata Salecl, has been opining about what she calls the “tyranny of choice.”  She touts herself as a “neo-Lacanian psychoanalyst and philosopher,” i.e. a hack who couldn’t get a real college degree.  In an interview with Der Spiegel, she openly attacks freedom of choice as being “unhealthy” and the ultimate slavery.

“When I speak about the “tyranny of choice,” I mean an ideology that originates in the era of post-industrial capitalism. It began with the American Dream — the idea of the self-made man, who works his way up from rags to riches. By and by, this career concept developed into a universal life philosophy. Today we believe we should be able to choose everything: the way we live, the way we look, even when it comes to the coffee we buy, we constantly need to weigh our decision. That is extremely unhealthy.” 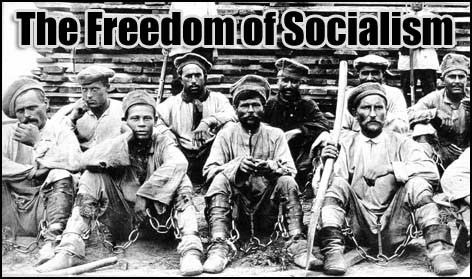 Despite this, she still claims that she supports “electoral” freedom.  However, the truth of the matter that such “freedom” is just a validating rubber-stamp, where the people don’t have to make the real decisions, but where the debate is pre-framed for them to reach the pre-determined consensus laid out for them.

She further expounds on this slavery:

“One of the greatest gains of capitalism is that even the proletarian slave feels like a master. He believes he has the power to change his life. We are propelled by the ideology of the self-made man: we work more, we consume more and in the end we consume ourselves.”

Of course, she ignores the obvious fact that in a free society, we are not mere slaves who just think that we are masters, but rather free men and women who are the masters of their own lives.  We are responsible for ourselves.  We exercise the strength and conviction to provide food, clothing, and shelter not only for ourselves and our families; we are capable to planning for old age, sickness, or other disaster.

Not everyone may be able to reach that ideal.  But enough people will where they can provide voluntary help to provide for those who can’t, and to help those who could.  That is how a free society creates prosperity, free from the “protective” hand of Leviathan.

This is the Progressives’ ideal of a new feudalism, where elites run everyone else’s lives for them, freeing those serfs to find their own happiness and giving them the “freedom” to live in a world that the elites force upon them.

Dependence is not freedom.

Salecl let this slip in a TED talk where she explains how “[i]n our post-industrial capitalist age… freedom and self have been elevated into an ideal — the ideal” and thus “this has made us unable to move toward social change; our abundance of choices has made us politically passive.”

A person who is able to stand on their own two feet and provide a secure home for themselves and their families — free of the whim of elites, bureaucrats, or Leviathan — will be invested in the social and moral order that is conducive towards freedom and prosperity.

If you take away that “tyranny of choice,” then a free man or woman’s interest no longer has to do with a social and moral order that is conducive towards freedom, but rather in a benevolent state.  Once that happens, the state can then impose what ever new social order it wants.  The people will support that change because the state mandates that change, and the people’s interests lie in a supporting those who offer that dependency.

This is no different than a junkie doing anything for a fix from their drug dealer (and likely also pimp).  In other words, welfare is the opiate of the masses.   A kinder view of the our future benevolent overlords might be that we are cherished pets to be pampered, and who exist to please our masters…

It does beg the question:  What about those selfless elites that will make our choices for us?  Are they Christ-like figures who take the burden of the world upon themselves, or are they truly Übermenschen who are “more equal than others”?