Assisted Suicide of the Republican Party

The Republicans in Congress are on the verge of relegating the GOP to the permanent status as the minority party.  Despite the failure of the 1986 immigration reform which promised to, but failed to, control the border, many Senate Republicans are actually taking the lead on pushing amnesty with the fig leaf of empty promises on securing the border – And the Democrats are ever willing to assist. 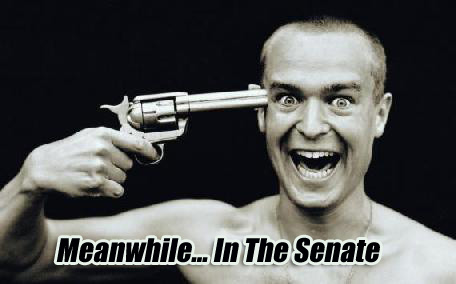 Senators who were once thought to be rising stars such as Marco Rubio, or senators who had actually campaigned against amnesty, such as Dean Heller, have stabbed all their supporters in the back in the delusional belief that all of the sudden the legalized illegal immigrants will vote for them, rather than the Democrats.  Yet again, the example of the 1986 law proves that to be at best wishful thinking.

The problem is that the Democrats are experts at social corporatism, where they reduce the civic basis of America to just oppressive machinations of “H8ers” and “Kyriarchs.”  The Progressive Democrats foster and use racial divisiveness to pit more controllable racial groups against whites and thus the American essence they have reduced to just being a “racist white” thing that must be destroyed.  They have been so bold as to explicitly come out and say that they are just supporting amnesty for the votes that it would bring, even to the point of allowing these illegal immigrants to get away with crimes that would put citizens and legal immigrants in jail for up to 15 years!

America has historically been able to successfully assimilate mass amounts of immigrants due to the strong civic nature and fabric of America, and the promise, not just for freedom, but for freedom and something better than where they left from.  However, through the cult of “diversity,” “multiculturalism,” and the debasement of American society, our capacity to assimilate is at an all-time nadir, if not still in decline.

The result is that rather than adding millions of new Americans who want to embrace the essence of what it means to be an American, the Republicans are helping the Progressive leadership of the Democratic Party replace those pesky Americans with their un-Progressive views with people the Progressives find more “useable.”  Yet again, the Democrats channel Bertold Brecht, as they assist the Republican party with its own suicide:

After the uprising of the 17th of June
The Secretary of the Writers Union
Had leaflets distributed in the Stalinallee
Stating that the people
Had forfeited the confidence of the government
And could win it back only
By redoubled efforts. Would it not be easier
In that case for the government
To dissolve the people
And elect another?