The U.S. Federal government has in the past supported the type of research into human-animal chimeras that could lead to the genetic engineering of catgirls for domestic ownership. Past political opposition is now being seen on the Federal level, despite the a technology gap potentially developing, with many Senators apparently opposed to this high and noble goal.

“Federal officials have placed a moratorium on U.S. funding of such research. Still, they are reviewing the restrictions and scientific developments as Congress debates a bill to spend nearly $200 billion of taxpayers’ money on research and development endeavors to counter China.

“Sen. Mike Braun, Indiana Republican, said he is worried that such human-animal hybrid experiments will cross ethical boundaries and contravene the dignity and sanctity of human life.

“‘I mean, any of us could speculate on kind of the Frankenstein concept, let’s put it that way, which that was being referred to as in terms of what this leads to,’ Mr. Braun said. ‘I don’t know. I think that I do believe that there’s a genuine interest in taking so much that we’ve learned through DNA analysis, understanding the genome of not only human beings but other animals, that there’s going to be that [temptation] contagion to go beyond maybe, just the altruistic effort of finding cures for very, very vexing ailments like ALS, like Alzheimer’s, like any of the diseases that are out there that are significant, that we’re not even to the point where we know exactly what causes it, let alone cures.’ 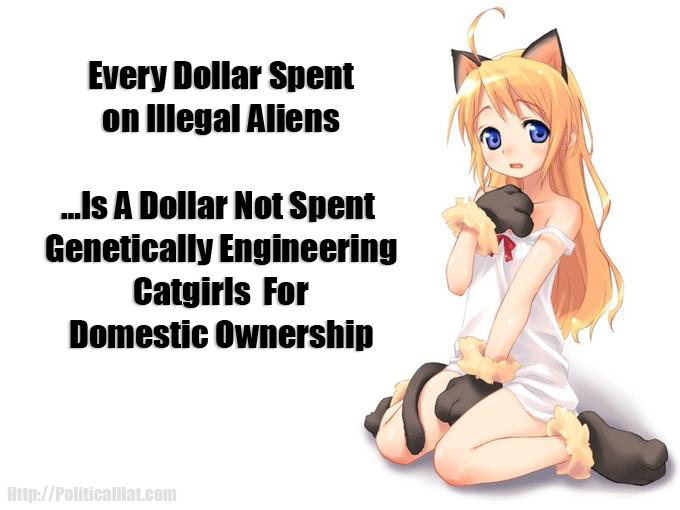 A report from the National Institute of Health even noted the potential for creating clever catgirls… though not explicitly.

“The report said some studies of human-animal hybrid experimentation surrounding the brain, involving neural chimeras, created concerns about ‘animals acquiring attributes that could be viewed as distinctly human, or humans taking on roles that should be reserved for a deity.’”

Are all these potential concerns about mad scientists “playing God” really worse than not having catgirls or other kemonomimi in our future?

No, of course they aren’t.

One Response to Senators vs. Catgirls