Woke Doctrine Of Equity Coming To The Department Of Justice

Posted on November 9, 2020 by The Political Hat 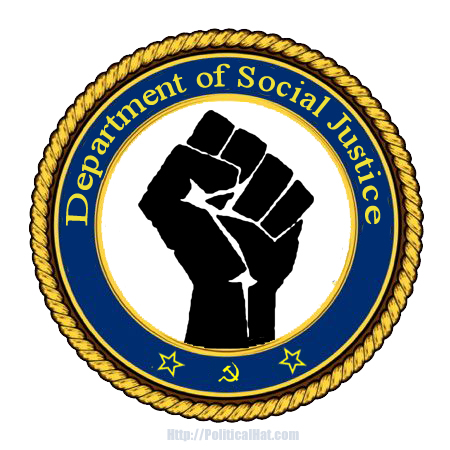 The systemic racial discrimination of the “racial equity” concept looks like it’ll be the official policy of the Dept. of Justice since the election has been called by a reputable source, which barring unexpected legal developments (it is still the year 2020, after all), will result in California Sen. Kamala Harris becoming Vice-President and the Dept. of Justice becoming the de facto Dept. of Social Justice of the “Harris-Biden” administration. Aside from the old standbys of assuming guilt by “disparate impact” and removing the protections college students have in campus Star Chambers, we will see a push to destroy racial equality under the law and replace it with equity. A tweet by Harris demonstrates this commitment.

There’s a big difference between equality and equity. pic.twitter.com/n3XfQyjLNe

Equity, of course, assumes that life is a zero sum game. In this case, they sort it by race and assume that one racial group doing statistically better than another requires a redistribution to counter this inequity by taking away from some and giving to others, and do so on a racial basis as if all “privilege” or “disadvantage” is shared equally amongst all members of a racial group as if they were some single organism.

What this does is dismiss the possibility of personal agency and assume that if you just change circumstances such that all are equal, than of course you will get an equal result. Any inequality due to “White Privilege” being blamed like some poltergeist that will always haunt us. And of course that will happen because this idea ignores the fact that children of parents who live their lives and teach their children good habits, morals, &c. are always going to be more likely to succeed in life than someone whose parents are junkies, have broken familial relationships, or poor habits, morals, &c. No program of “equity” can or will change this.

“Equity” means having an equivalent share in governing society, which requires inequality of outcome because White people are considered to still have “White privilege” and the only way a non-White individual can have an equivalent share in governing society is if White people are discriminated against and end up less than equal in outcome. It is justification for perpetual discrimination on the basis of race regardless of outcome.

In other words, “some… are more equal than others”.

That this will not change the underlying problems that cause disadvantage to children, but only drag down people to a “more equal” and equally worse off position just goes to show that Margaret Thatcher’s insight into the mindset to the Left about economics is just as true in their views of society itself.