“The Scientific Method is Anti-science.”

‘Twould seem that the woke mathematics textbook we all must use is “1984”. 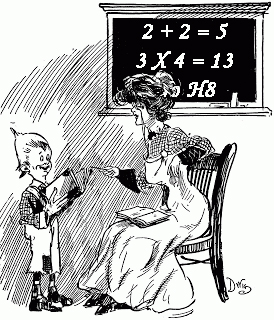 Going beyond “2 + 2   5” argument, the Mathematical Association of America has released an “Anti-Science Policy and the Censure of Discourse on Race and Racism.“

This means only one thing… a fisking!

“We stand in the midst of a year of transitions. We have long been aware of broad shifts in the postsecondary education landscape, but 2020 has also been marked by the COVID-19 pandemic and emergency distance/online/hybrid teaching. Each of these new challenges for higher education has evolved alongside a movement to stand up for Black lives. The data are clear: these issues are inseparable.”

Ah, þe olde “appeal to authority” fallacy (argumentum ad verecundiam). The #BlackLivesMatter organization, let alone Antifa and all the rioting/revolutionary mayhem, are about as related to each other as the price of a Uygher fetal liver harvested in a Xinjiang Sinkiang does with L’Hôpital’s rule. Right away they are fully invested in Critical Race Theory without bothering to even try to justify it.

“Black, Latinx, and Indigenous lives are the most affected by policing, health, and education policies.”

Aside from the use of the term “Latinx”, which is another give-away that this is all based on ideology, it further doubles down on the idea that White privilege is so overwhelming and powerful that bad policing, ill health, and mis-education are incapable of negatively effecting people because the “system of oppression” grants them this near mythical power while sapping non-White individuals of any choice or even agency.

And, as herein shown, apparently also by a de facto religious ideology.

“Thanks to science and mathematics, we understand now that masks, social distancing, frequent, rapid, mass testing, and contact tracing are all fundamental to keep our communities safer during the COVID-19 pandemic. Yet policies at the federal level have not consistently reflected these facts; for example, choosing not to incorporate a mask-mandate in the US has had serious consequences.”

Note how this statement ignores the possibility considerations other than data and scientific findings. While “data and science” alone might indicate certain measures, that those measures cold have consequences beyond the parochial question at hand does not mean incorporating moral values or other preferences are “anti-science”.

Science can inform public policy and private action; it does not dictate them.

“As Michael Dorff and Michael Pearson stated in a recent Math Values blog, ‘We encourage MAA members, regardless of political persuasion, to speak out for the value of science and mathematics, and hold our leaders accountable to make use of the best possible scientific evidence in policy decisions.’”

‘Tis but further conflation of ideology and science/mathematics.

“The social sciences are part of this community, helping us understand how to effectively communicate these practices to people, while also simultaneously analyzing our practices and policies with a critical lens. Critical race theory, referenced in recent Executive statements by the President of the United States, is an established social science inquiry which is grounded in decades of scholarship.”

Social sciences are not actual sciences. Oh, they might use statistics as a tool or at times require mathematical logic, but things like Critical Race Theory at best only abuse such things. The inclusion of the phrase “ simultaneously analyzing our practices and policies with a critical lens” is an admission that they are filtering science and mathematics through an ideological lens. That they try to justify this be declaring Critical Race Theory (which itself is a textbook example of “begging the question” by “proving racism” by uncovering evidence of racism because it presumes it is there only waiting to be found) “an established social science inquiry”, which is itself both an “appeal to authority” fallacy (argumentum ad verecundiam) and an argumentum ad populum fallacy.

“It is misguided, at best, to reduce this theory to the race-blaming of white people and to define it and the discussion of systemic racism as a “‘divisive concept.’”

It is hardly “misguided” to characterize it for what it demonstrably is. Note that the assumption of systemic racism which is necessary to justify the application of Critical Race Theory, which yet again “begs the question”.

“Furthermore, banning training utilizing this scholarship to raise consciousness, from federal and federal contractor workplaces, is an encroachment on science and the academy.”

On the contrary, Critical Race Theory, and the “racial sensitivity training” that is based thereon and in actual use, precludes dissent and utilizes a Kaftka Trap to silence dissent.

“At the first presidential debate this year, President Trump’s refusal to disavow white nationalism and his encouragement of groups that the FBI has identified as the greatest threats of domestic terrorism, only serves to reinforce the sense that his administration seeks to reverse decades of progress on civil rights for all citizens. These actions frame a current United States leadership that consistently promotes policy in direct opposition to data and science-based evidence.”

An obvious ad hominem attack. Beyond that, there is the assumption that the “data and science-based evidence” reach the same conclusion that Critical Race Theory uses as its starting point.   It is this policy position being fisked that “frames” things to conform to pre-conceived notions.

“Although mathematics, science, and higher education develop fact-based theories and practices that should inform policy, they are also political because they exist within a highly politicized system.”

No. Science and mathematics are not “political”. They can inform political or other considerations, and certainly politics and other considerations can direct what research is funded or what scientific questions are most salient, but they can also bias research, results, and interpretations. To declare “mathematics, science, and higher education” to be political and then adhere to the exclusionary line of “analysis” of Critical Theory is to subsume “mathematics, science, and higher education” to political ideology and birth a myriad of modern-day Trofim Lysenkos.

“Acknowledging that the United States has serious systemic discrimination has somehow leaped from a political issue to a partisan issue.”

Again, notice the systemic nature of discrimination being presumed. To then wonder why others are treating it as an “us vs. them” when they simply react to the fact that that is how it was set up is… intellectually obtuse at best.

“More alarmingly, what we see is a series of pronouncements apparently designed to suppress conversation and action on race and racism in the United States. The American Educational Research Association recently released a statement that clearly addresses this troubling pattern of the federal response to racial justice unrest in the US, which reframes the conversation on race and racism as ‘unAmerican.’”

It’s “framed” as “unAmerican” because collective guilt and collective victimhood is antithetical to America’s core essence.

“We borrow from and add to their list of recent, deliberate actions taken by the federal government:

“1.   A September 4th Executive Memorandum to all Executive Departments and Agencies states that “all agencies are directed to begin to identify all contracts or other agency spending related to any training on ‘critical race theory,’ ‘white privilege,’ or any other training or propaganda effort that teaches or suggests either (1) that the United States is an inherently racist or evil country or (2) that any race or ethnicity is inherently racist or evil. In addition, all agencies should begin to identify all available avenues within the law to cancel any such contracts and/or to divert Federal dollars away from these unAmerican propaganda training sessions.’”

This disallowed training isn’t a “conversation on race and racism”. To declare as an unequivocal fact that “the United States is an inherently racist or evil country” is to literally be “unAmerican” unless you support racism and evil. To declare “any race or ethnicity is inherently racist or evil” is itself designed to “suppress conversion and action on race and racism” by itself being hateful and racist.

“2.   On September 6th, President Trump tweeted that the Department of Education was investigating schools using the 1619 project – a Pulitzer-Prize winning project meant to help fill a gap in mid-20th century US history by providing educational materials on slavery – and would withdraw funding.”

Spoiler: The year 1619 did not occur in the mid-20th century. The “1619 project” is historically inaccurate and designed as a “narrative”, not as historical fact or let alone as “science” or “mathematics”.

“3.   The September 16th launch of a Department of Education investigation into Princeton University weaponized a recent letter from Princeton’s President describing Princeton’s efforts to move forward with structural reform in response to reflection on their past. ‘On September 2, 2020, you admitted Princeton’s educational program is and for decades has been racist. Among other things, you said “[r]acism and the damage it does to people of color persist at Princeton …” and ‘[r]acist assumptions…remain embedded in structures of the University itself.’”

The Federal government shouldn’t subsidize institutions that are inherently racist. It is rather hypocritical to demand we fight systemic racism while outright defending an institution that by its own admission is systemically racist.

“4.   The September 22nd Executive Order is framed by a preamble centering white men as being hurt by blame for racism in the US, which effectively extends the September 4th ban on racial equity training to all Federal contractors. It then defines a list of “divisive concepts” which, for example, includes the idea that the meritocracy is “racist or sexist, or were created by a particular race to oppress another race, as well as new terms such as “race and sex stereotyping” and “race and sex scapegoating” which seek to renarrate white fragility as racism against white people.”

The Executive Order did not frame or define any of this: “Racial equity training” materials did, either by their manifest goal or even by explicit language.

“5.   The September 28th Executive memorandum, which directs Federal funding agencies to ‘identify all programs for which the agency may, as a condition of receiving Federal grants and cooperative agreements, require the recipient to certify that it will not use Federal funds to promote the list of concepts listed in Section 5 of the[September 22nd] Executive Order.’”

“As mathematicians, we notice patterns – this is something we are all trained to do.”

Clearly, not very well if this position statement is anything to go by.

“We bring these Executive actions to our community’s attention for several reasons: we see the pattern of science being ignored and the pattern of violence against our colleagues that give voice to race and racism.”

Stopping “Critical Race Theory” from being imposed on people, including by the “racial equity training” struggle sessions is not “science being ignored” but rather protecting scientific endeavors from ideological blinders. Stopping people from being treated unequally on the basis of race or ascribing moral blame due to the same is the exact opposite of racism and in no way results in violence, whether it fits a pattern or otherwise.

“We need to fight against these patterns. As educators, we also recognize the threatening pattern of banning education and withdrawing education funding to suppress conversations on race and racism, extending from elementary to postsecondary institutions to the workplace and research spheres.”

“It is time for all members of our profession to acknowledge that mathematics is created by humans and therefore inherently carries human biases.”

The mathematics itself is either true or it isn’t dependent on humans existing. What mathematical expressions and equations communicate is not created by humans; only ways of making that understandable is “created by humans”.

“Until this occurs, our community and our students cannot reach full potential. Reaching this potential in mathematics relies upon the academy and higher education engaging in critical, challenging, sometimes uncomfortable conversations about the detrimental effects of race and racism on our community. The time is now to move mathematics and education forward in pursuit of justice.”

One Response to Orwellian Wokeness Comes To Math