Modern day “struggle sessions”, whereby Whites and/or Males (usually both) are taken aside and made to admit how everything is their fault and forced to explain how they will repent their sin of “Whiteness” and/or “Maleness”, are not just limited to hardcore Woke satrapies like Seattle, but moving to scientific institutions including America’s National Laboratories.  Case in point: Sandia National Laboratory.

Christopher F. Rufo, once again, sheds light on these struggle session by providing the indoctrination materials used. Much of what he goes into detail about is sadly becoming the norm, and increasingly ever-present, especially the use of “intersectionalism”. 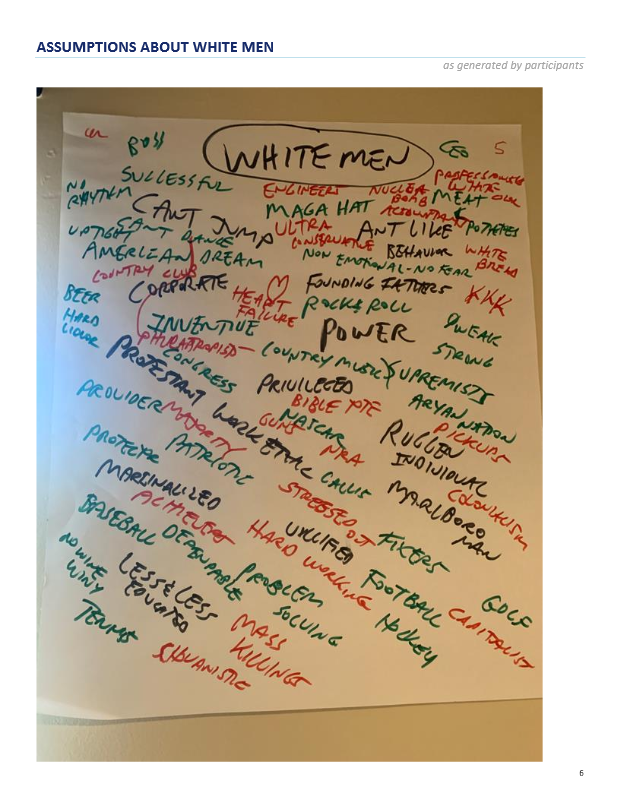 Your humble author has made a few additional observations. Most notably is the insistence that White males respect the “truths” and “realities” of “POC” and women. This was being taught in a national laboratory that has materials and equipment that can literally kill not only a person who applies their alternate “truth” to an experiment but people throughout the facility. For f**ks sake they even have literal death rays, plutonium, and other assorted goodies at national labs!

Most strangely, the people who put the indoctrination materials together seem obsessed with White men playing golf.

The part that ought to give people the greatest pause and concern is the odd use of the word “grace”.   Yes, you probably know and can define the word “grace”, but it is pretty clear that they are using some new “woke” definition similar to how the word “racism” gained a new “academic” definition not used by the unwoke masses. Examples of it’s usage:

Here are the leaked documents from the race-segregated, taxpayer-funded session.👇

The trainers insist that white males must "work hard to understand" their "white privilege," "male privilege," and "heterosexual privilege." They claim that white men benefit from positive stereotypes that "far outweigh the Tim McVeighs and Ted Kaczynskis of white maleness." pic.twitter.com/FyKW1ynz4G

Next, the white male employees must expose the "roots of white male culture," which consists of "rugged individualism," "a can-do attitude," "hard work," and "striving towards success"—which sound good, but are in fact "devastating" to women and POCs. pic.twitter.com/saVYdG6bHJ

In fact, the trainers claim that "white male culture" leads to "lowered quality of life at work and home, reduced life expectancy, unproductive relationships, and high stress." It also forces this "white male standard" on women and minorities. pic.twitter.com/xVIkMXwbBG

Finally, as the reeducation camp concludes, the white males must write letters "directed to white women, people of color, and other groups regarding the meaning of this Caucus experience." They apologize for their "privilege" and pledge to become "better [allies]." pic.twitter.com/LZIB22CpYc

It's time to expose this taxpayer-funded pseudoscience and rally the White House and legislators to stop these deeply divisive training sessions. My goal is simple: we must pass legislation to "abolish critical race theory" in the federal government. Let's push as far as we can.

P.P.S. Many of you have asked how you can support this series of investigations. I'm rallying an army of $5 and $10 monthly donors—I'd love to have you on my team.https://t.co/GpeTTG6wV4

It is only a matter of time before this moves to private corporations, especially when it becomes expected in order to preempt “hostile work environment” lawsuits or more direct government punishment.