To many people, the temper-tantrums in Portland and Seattle, as well as rioting elsewhere, the danger of the Left is presumed to be of a Jacobin nature of open revolt and tearing down, and more akin to the French, Russian, and Chinese Communist revolutions, which many people fancy will never have the proper support and can be opposed the non-Antifa majority.

This, however, ignores the fact that these “autonomous zones”, #BlackLivesMatter, and Antifa black bloc thugs have tacit approval, if not outright support, of governments and powerful corporations, all of which combine to have actual “institutional privilege” (to use their parlance).

Portland’s mayor allows Antifa to run wild, Seattle is moving to hire just social justice advocates, Berkeley is replacing police for things such as traffic stops, and Columbus wants to purge its police force of thought criminals according to not just the SPLC’s lists, but beyond that.

That private companies have gone woke is manifest, with not only corporatist collaboration with government, but completely without prompting from the state.

The danger comes not from the mob or even those who are honestly caving into the mob, but from those who act in a Fabian nature to use the mob as an excuse to implement in a seeming “moderate” stance what the mob was fighting for anyway.

Indeed, it is less a Jacobin revolution than a Fabian one won by more than a century of the Gramscian march through the institutions. But perhaps there is an even better comparative example: The National Socialists and their co-option of Germany from the inside. 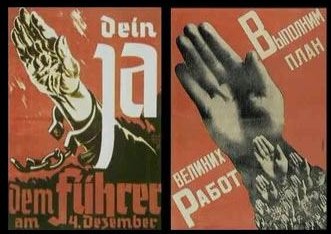 The “Straßerites” were the ones in Germany who wanted to replace the police and even military with a people’s force, and to immediately push for the National Socialist’s 25-Point Program to “break the shackles of finance capital”. If one were to take said 25-Point program and to replace the German/non-German references with “Persons of Color”/White references and such, the modern day woke Left would say that this National Socialist Program doesn’t go far enough! There was a reason they were called “Beefstakes”—Brown on the outside and Red on the inside.

The “Hitlerites”, still, were firmly against “Jewish” capitalism and joint-stock corporations, but they knew they needed to bring them into the fold in a more traditional Fascist sense before “fundamentally transforming them”, much as they would eventually “fundamentally transform” the army (e.g. eventual supplantation with an organization like the Schutzstaffel).   They went not the route of street rioting and confrontation but of a more slow and poisonous take-over. And still, the Nazis were indeed “kissing cousins” of the Marxists.

The “Hitlerites” are often said to not be socialists because they didn’t take up the Marxist-flavored “class struggle”, which ignores that non-Marxist socialism didn’t require class warfare. Even then, the co-option of both capital and labor was clear. Much like in Communist countries, labor was brought under the umbrella of the NSDAP party, which would represent their interests, as it would also represent the interests of the companies that fell in line with the dictates of the Nazis—much as we are seeing today with the increasingly public sector unions and woke corporations.

This is not to say the Antifa, #BlackLivesMatter, or the woke take over (and union) of big business and the state makes any of them Nazis, but only that their tactics have a greater parallel with the National Socialists than with the French or Russian Revolutions more sudden upheavals, though like the Nazis, the modern day movements are certainly hell bent on laying the blame on a “privileged” racial group.

One Response to The Hitlerite Playbook