The Underground Railroad Is Now Racist

A mural at the Vermont Law School which depicts the underground railroad and both Black and White individuals helping said slave, including Frederic Douglas, Harriet Beecher Stowe, and John Brown has been deemed racist and oppressive.

“‘The depictions of the African-Americans on the mural are offensive to many in our community and, upon reflection and consultation, we have determined that the mural is not consistent with our School’s commitment to fairness, inclusion, diversity, and social justice,’ McHenry said in the email.

“The colorful mural entitled ‘The Underground Railroad, Vermont and the Fugitive Slave’ depicts Africans being forced into slavery and sold at auction, images of John Brown, Frederick Douglass and Harriet Beecher Stowe, and a blond Vermont woman trying to block the view of a bounty hunter looking for fugitives trying to escape slavery on the Underground Railroad.”

“‘One issue of many, is the fact that the depictions of Black people are completely inaccurate. Regardless of what story is being told overexaggerating Black features is not OK and should not be tolerated. White colonizers who are responsible for the horrors of slavery should not also be depicted as saviors in the same light,’ they said.” 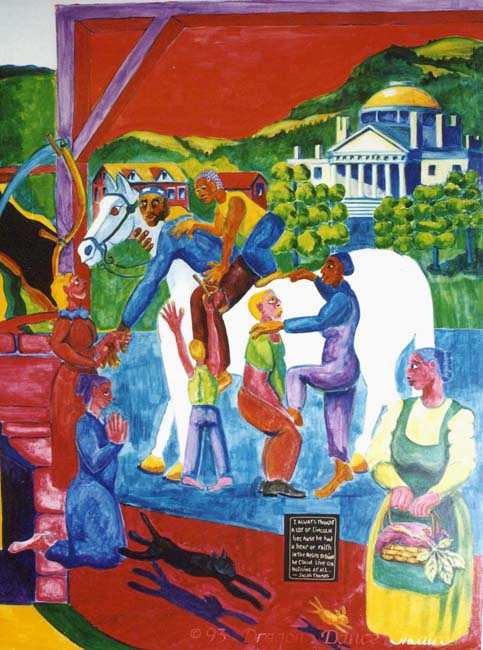 The only problem with the mural is that is it ugly, in your humble author’s opinion, and all the figures are painted in an unapealing way.

Only in this woke day and age would a celebration of the fight against slavery be considered “problematic”.

It’s only a matter of time before the famous post office mural of John Brown is taken down for celebrating an evil White man.

One Response to The Underground Railroad Is Now Racist