When The Revolution Comes?

There are some people who seem to be curious contradictions. They are absolutely histrionic over America being lost an the eternal doom that would bring, yet somehow chalk this up to either some identified conspiracy or simply an example of perpetual surrender, while concomitantly believing that all it takes to defeat this unitary evil if for people so stand up in a manly way and by sheer lack of soy-products cause an instant victory for their side.

The are both histrionic and Pollyannas: They are the Histrionic Pollyannas (who are taken advantage of by the snake-oil salesmen. 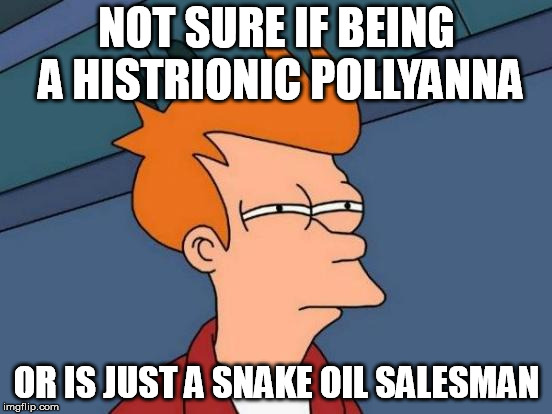 To a large degree this is an underestimation of the Left, who have not only take over the levers of power, human capital, and financial capital, but have despite the stereotypes a plethora of people who can and will do all the “blue-collar” jobs that the Histrionic Pollyannas don’t believe they can do because their only exposure to these elements of the right are social media posts about the idiotic and disposable “vanguard” of “soyboy beta cucks”. ‘Tis also an ignoring of the unsurprising (well, unsurprising if you actually pay attention) fact that those of the Left stereotype the “Right” as a bunch of old and scooter-restricted (and diabetic, and fat, and …) fossils who will soon be gone and unable to stop the wokeness.

One of these Histrionic Pollyanna fantasies is that if social order breaks down, the “others” of the Left will fall apart into anarchy, and that somehow the “alt-woke” right will be able to coordinate without interference as the “urban” centers self-destruct while the allegedly prepared can without too much psychological pressure not only organize and coordinate, but also feed, arm, and otherwise provide themselves with the most vain and superficial of luxuries that the shutdowns due to Corona-chan have shown that the lack thereof will cause the sunshine warriors to have mental breakdowns due to lack of a haircut or having to wear a mask.

From this fantasy, the most optimistic delusion is that the masses will rise up and without need of any goods or ammo that might be disrupted from such an insurrection somehow be able (without foreign intervention) cause all the powers to be to be killed or surrendered. However, another such delusion from this is that as noted above: Brave manly-men and women organizing and winning with military tactics against almost tribal and uncivilized people. This is just wish-casting and a desire for a LARP they do not grok.

So, how would a clever strategy of laying in ambush to defeat the aggressive mob and negate threats work in real life?

It’s work very well… for those mobs who can, will, and have targeted the pseudo-military delusions of the Histrionic Pollyannas.

“The chief of the Tampa Police Department says his officers were “ambushed” early Saturday morning.

“TPD Chief Brian Dugan says officers were called to the intersection of 15th Street N and 26th Avenue E for a report of shots fired with a possible victim.

“He says when officers arrived, hundreds of people had all four intersections completely blocked, and as they attempted to locate a victim, the crowd became aggressive.

“As officers took one person into custody, the crowd surrounded officers and threw glass bottles, while several subjects jumped on one of the officer’s cars.

“‘There were hundreds of them. Hundreds. We ended up having to call every single police officer that was available that night to respond there, from New Tampa to South Tampa,’ Dugan said.”

But that’s just thrown bottles… a fool might say.

But the tactic works. If s**t really happens, bottles will be the least worst of one’s worries. And this assumes that the police will be allowed intervene further (As CHAZ/CHOD has demonstrated the limitations thereof) or that higher loyalties haven’t been swayed.

It is easy to assume that popular opinion is the opinion that you share and in an all or nothing gamble ya can’t lose if ya just stand up against this, that, and the other.

2 Responses to When The Revolution Comes?