Volonté Générale: The Coming Dawn of the Hive Mind?

Posted on February 5, 2019 by The Political Hat

Since the days of Rousseau, the Left have pined away for their secular god, the Volonté Générale (i.e. the “General Will“) which exists as a singular will arising Borg-like from the masses. Such a “general will” of a populace is a fiction used as a fig-leaf of legitimacy by the worst of tyrants. Now, however, it seems that a unified hive-mind may be scientifically plausible:

“Neuroscientists have successfully hooked up a three-way brain connection to allow three people to share their thoughts – and in this case, play a Tetris-style game.

“The team thinks this wild experiment could be scaled up to connect whole networks of people, and yes, it’s as weird as it sounds.

“In the experiment set up by the scientists, two ‘senders’ were connected to EEG electrodes and asked to play a Tetris-style game involving falling blocks. They had to decide whether each block needed rotating or not.

“To do this, they were asked to stare at one of two flashing LEDs at either side of the screen – one flashing at 15 Hz and the other at 17 Hz – which produced different signals in the brain that the EEG could pick up on.

“These choices were then relayed to a single ‘receiver’ through a TMS cap that could generate phantom flashes of light in the receiver’s mind, known as phosphenes.

“The receiver couldn’t see the whole game area, but had to rotate the falling block if a light flash signal was sent.” 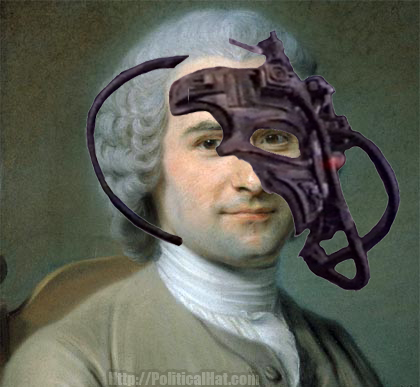 This entry was posted in Progressives, Science and tagged Communism, Leviathan, Science. Bookmark the permalink.