Posted on February 4, 2019 by The Political Hat

The world is dividing between those few countries (primarily Russia, Cuba, Iran, South Africa, China, Turkey, and Bolivia) who support Maduro and much of Latin America, Europe, and the United States of America who are either recognizing opposition leader Juan Guaido or are calling for new and fair elections. 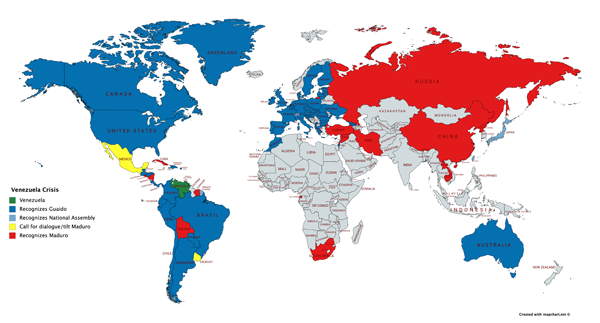 While the suffering of the Venezuelan people continues, including economic woes involving inflation and the potential bankruptcy of the oil company Citgo, Maduro’s disaster is increasingly affecting other countries very negatively.

The question, then, is will the government apparatus support Maduro, or turn on him. The opposition are trying to woo the army, and the public are growing bolder in standing up against Maduro, despite Maduro sending in “special police” to crush dissent. The question of foreign military assistance is more than just open, including from the United States.

BREAKING: US Armed Forces have arrived in Columbia, along the border with Venezuela to be ready if called upon pic.twitter.com/5KkUYGLZyo

There is a possibility that Venezuela could become a proxy conflict reminiscent of the Spanish Civil War. Ah, the proverbial “interesting times”.