Outside of science fiction, give or take some mitochondrial DNA, it still take a man and a women to make a baby, with the man becoming a father and the woman becoming a mother. Legally, in the U.K., this may no longer be considered true.

“A baby could become the first person without a legal mother if a transgender man wins a historic court battle.

“Lawyers representing the parent told a judge that he had been biologically able to get pregnant and give birth but had legally become a man when the child was born.

“The man wants to be identified as the child’s ‘father’ or ‘parent’ on a birth certificate, however a birth registrar told the man the law requires people who give birth to children to be registered as mothers.” 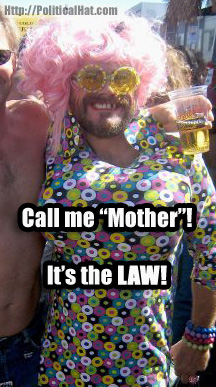 But these words have been appropriated so that they have no objective meaning and no purpose except to “smash the gender binary and cis-normativity”. The words which still meant something from the past will be co-opted to mean something that they didn’t, and people’s use of the old meaning will continue to be exploited until a rectification of names.

This woman became pregnant via intrauterine insemination, meaning that the law would require to believe what is biologically impossible: That a child does not, nor ever had, a mother.

This entry was posted in Progressives and tagged Europe, Gender, WTF. Bookmark the permalink.

4 Responses to Legally Motherless in Britain