Sex and Gender are NOT Social Constructs 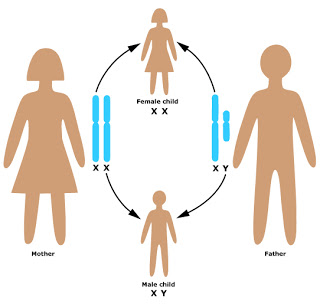 This is underscored by an androgynous blogger “Lane Silas” which sadly represents a growing segment of the Western World’s yutes, and thus the end stages of millennia old civilization…

This level of smug pseudo-intellectual idiocy requires a fisking.  In order to reduce repetitiveness, it should be noted that there are abnormal cases of non “XX” or “XY” chormosome pairings (e.g. XO, XXY), or of a body developing in utero contra to chomosomes, but those are rare and not indicative of a “social norm” of recognizing that the vast majority of people are indeed women or men, a fact confirmed by not only our entire history as a species, but of practically every other mammalian species in existance.

Further, it will reduce repetitiveness to point out basic biological reality: A “Y” chromosome in lieu of a second “X” chromosome is like a fork in the road that instructs the biological program (i.e. DNA) to develop the body and mind along that of a woman (when no “Y” chromosome is present), or that of a man (when there is a “Y” chromosome).  Men and women are physically and physiologically distinct from each other on a clear statistical basis.  There is not gradual spectrum.  You have two distinct averages with outliers that at the extremes can overlap, like two Gaussian curves.  Outside of the previously mentioned biological abnormalities, this holds true, and does so for the vast majority of the population.  There is no moral or sociological implications from this statement of biological facts per se.

And let the fisking begin…

“As you read the title, you may be overcome with indignation that this article is going to be a gender-essentialist rant. You’ll be relieved to know that it’s quite the opposite. My intent in writing this is to point out some serious misconceptions perpetuated in ‘trans 101′ and cisgender allyship resources, which end up doing much more harm than good for transgender people.

“Anyone with an entry-level understanding of trans issues is probably familiar with the phrase ‘gender and sex are different things.’

“While the idea of treating sex and gender as unrelated factors may result from an attempt to validate and support transgender identities, it actually perpetuates harmful cultural beliefs about the validity of sex assignment and the static nature of biological sex, which remove agency from trans and intersex people to define their own bodies and experiences. This way of thinking does nothing to combat (and in fact often co-signs) the pathologization, alienation, and exclusion of trans people, especially trans women, on the basis of their seemingly immutable ‘biological sex’.”

Darn.  It started out with a reasonable statement, that “gender” and “biological sex” are not two different things… but then shoots itself in the foot with the idea that “biological sex” is just some fungible thing…

“The reality is that the concept of ‘biological sex’ — along with gender, money, and traffic laws — is entirely socially constructed.

“This is at least partially true. The physical tissue and organs, to which the concept of sex is assigned, are not socially constructed; they exist through nature rather than human design.

The term “social construct” seems to be a general negation of objective reality.  What a society does or does not believe to be true or accept isn’t even necessarily a “social construct” as the term itself suggests that all social norms and elements are purposefully created wholecloth from some intentional will of society rather than be a product of societal evolution.  But even then, that refers to opinion and not of objective scientific reality.

“The notion that one can validate a trans person’s ‘gender identity,’ while still placing their bodies in the same category as cis people of the same sex assignment, is something that has been used to justify exclusion and violence against trans women, the alienation of trans people from gender-specific spaces, results in improper medical treatment, and is just another tool of transphobia and transmisogyny that allows people to turn around and say ‘I respect your “identity”, but you’re still basically a ______.'”

Medicine is based on objective biological reality.  You either have a male body or a female body, with reactions from treatment or drugs at times being very important.  A woman will never have prostate cancer because women do not have prostates.  Further, stating that a man is a man is not caused by eeevil social constructs, but on the acceptance of reality.

“Biological Sex as an Instrument of Transphobia

“The concept of assigned sex as an unchanging objective fact has countless negative repercussions for trans people, from interpersonal relationships to accessing basic health care.”

“Cis people often employ the logic of biological sex to justify their experience of attraction or repulsion towards trans people, both of which can be rooted in transphobia. A lesbian attracted to a trans man can still consider herself to hold ‘gold star status’ if she still considers her partner to be ‘biologically female’. A straight man believes he cannot act upon his attraction to a transgender woman since doing so might make him ‘gay’.

“The concept biological sex reinforces the homophobia and pathologization that are integral to upholding institutional transphobia and transmisogyny.”

Biological sex “reinforces” nothing; it is an acknowledgement of reality.

“I could write a whole separate piece on the horror show that results when we apply this logic within the penal system and sentencing transgender people on their assigned sex, but I think this fact sheet by Just Detention International can shine a light on that for me.”

Pro-Tip: Despite the child-molestation advocate Alfred Kinsey’s protestations, prisoners use other prisoners not as lovers, but as masturbatory aids.

“And don’t get me started about how this whole ‘sex = biology, gender = psychology’ thing throws intersex people under the bus (considering a disproportionate amount of transgender people are intersex).”

Biological abnormalities noted above.  Hardly “throwing under the bus”…

“What does it even mean to have a ‘male body’ or a ‘female body’? Are those categories inherently dyadic? Are they solely dependent on your birth assignment? Your hormones? Your genitals? Does a non-op trans woman who’s been on HRT for years still fit into the same ‘biological’ category as a cisgender man? Is there a point at which, through medical intervention or legal recognition, a person ceases to be a member of one biological sex and assumes an officially designated and socially recognized new sex? Where do intersex people even fit into that? This entire concept is just a mess that quickly falls apart under the slightest inspection.”

This question being already scientifically addressed above, it should be noted that the “gotcha” is the imposition of a manichean falsity: That either there are two distinct sexes and concomitant genders, or there is no such thing as any of them!  This is a typical argument of the mentally deficient Left.  They create an absolute manichean strawman and then declare that any variation therefrom is absolute proof of their own positions.

“Trans inclusivity should redefine our understanding of gender and sex so that trans people are able to fit seamlessly within them (or better yet wouldn’t need to if the notions can be discarded entirely), not to have trans people straddle narrow, arbitrary classifications with certain parts of their personhood on one side of a line and certain parts on the other.”

One’s philosophical onanism does not define reality.  What you do or do not believe does not change objective reality.

“This is usually the point at which many scientifically-minded peers will take it upon themselves to point out the Hard Facts: “Male” and “Female” bodies have distinctive physical differences that result in different health care needs! You can’t change what chromosomes you have! A trans person’s health care will never be the same as that of a cis person of the same gender! We need to have these rigid physical criteria! For health! For science!

“First of all, the things we currently know about the intrinsic differences in male and female physiology are basically just that we know a heck of a lot less than we thought we did. Recent findings have shown that there are no significant differences in male and female brain structure and that chromosomes do not determine sexual development, and many things we previously accepted as “hard facts” are turning out to be just antiquated speculation.”

This is what happens when you have scientifically illiterate idjits go off about “science.”  The “differences in male and female brain structure” was used previously as “proof” that homosexuality was biologically based, and thus eligible for civil rights protection.  Now that that is a fait accompli, it is tossed aside!  The “article” on how chromosomes have totes nothing to do with one’s biological sex is laughable at best, with atypical examples being the “proof” to assert insanity by the manichean reasoning noted above.

“It’s almost as if the gender/sex binary was invented by people who then manufactured artificial qualifiers to reinforce it, which then became woven into our study of biology, medicine and psychology. Huh. Weird.”

“In reality, everyone’s medical needs are different. Yes, a trans man and a cis man will never have exactly the same medical needs, but also an able-bodied man will have different needs than a man with a disability, and there are even certain differences in medical treatment that exist between different ethnicities. Only a small portion of our medical treatment is actually affected by what’s between our legs, and when that becomes relevant to medical treatment, it needs to be discussed on an individual basis anyway.

“The differences in health care needs between a transgender person and a cisgender person of similar health are largely negligible. They become even more negligible if the trans person in question is undergoing hormone therapy, since there are more general medical concerns influenced by your present hormones (such as bone and muscle density, risk of heart disease, cholesterol, pattern baldness, and PMS) than there are directly influenced by the genitals you were born with.

“The idea that gender exists independently from sex and that transgender people should be lumped into their coercively assigned sex category for medical purposes only results in the gross mistreatment of transgender patients, as well as general confusion for their health care team.”

If you are a woman with an “XX” chromosome set who knows she’s a woman, and are asked if you might have prostate cancer, your doctor who asked the question is an insane quack who should not be trusted to do or say anything that doesn’t involve that “doctor” being restrained in a padded room whilst in a straight-jacket…

“The more we dissect the logic supporting the idea of biological sex and gender identity as independent and unrelated factors, the more apparent it becomes that this concept is more of a useful device for cisgender people to seem inclusive while still being transphobic, rather than something that actually benefits trans people. While educating others about trans inclusion and allyship, it is more important that the concepts we are reinforcing are helpful, rather than be easily integrated into other false preconceptions.”

The more we examine the “logic” of the loony Left, the more we realize that theirs is of a sickness that can not be tolerated and must be opposed, lest civilization be swept aside, with the aftermath of their utopia being trampled upon by some other sanity that arises, or comes it to replace it.

At least, when some future archeologist comes upon Mt. Rushmore, they will at least have some inkling that there was once a great civilization… and maybe, juuust maybe, they will learn from our mistakes.

* In some languages, grammatically gender neutral terms are used for some people, such as “das mädchen” being German for “little girl” despite the noun being neutral rather than feminine; though in this case the neuter is a “social construct” to indicate little girls being non-sexual.

One Response to Sex and Gender are NOT Social Constructs