Yet another attempt is being made by Silicon Valley capitalist Tim Draper to divide the state of California up into multiple states, this time into three states. A previous attempt, also by Draper, would have split California into six states with two of the six being Republican leaning and one and possibly in the future two states being “purple”.

Here we present a quick look at what this might mean politically.

First let us look at how the state would be broken up: 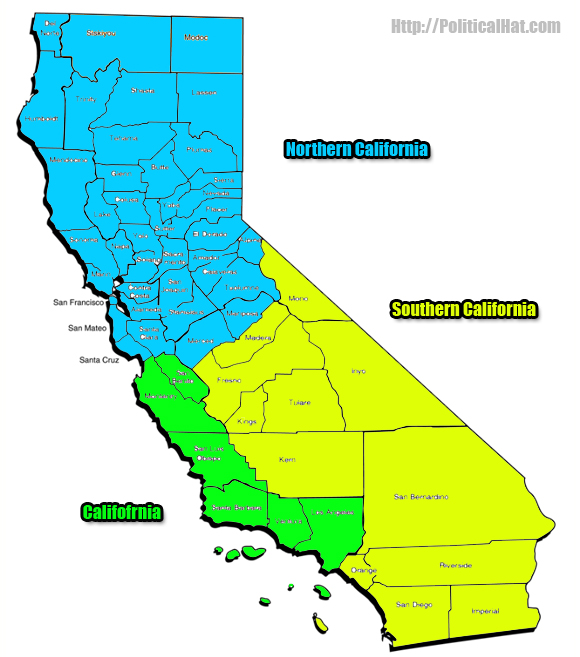 When it comes to education, specifically the highest tier of post-secondary education, the University of California, the new “Northern California” would win the lionshare of campuses, due to it being the historic population center in the 19th century, with UC Davis, UC Berkeley, UC San Fransisco (medical schoo only), UC Merced, and UC Santa Cruz falling within its border. In Contrast “Southern California would only have three: UC Irvine, UC Riverside, UC San Diego. “California” would only have UC Los Angeles and UC Santa Barbara.

House of Representative and Electoral College

Assigning House seats up by taking the current number (53) and assign them according to the percent of the California’s population in each, rounding appropriately, we get:

Thus in each state would have the following electoral votes:

To get a feel for the political situation in each of the new states, we’ll look at two recent elections: The 2016 Presidential election and the 2014 race for Secretary of State, which was the closest race for the Republicans of all the statewide races that year.

Both “California” and “Northern California”, unsurprisingly, voted heavily for the Democrat in both the 2014 Secretary of State race and the Presidential race, this being unsurprising with Los Angeles and the San Francisco bay area anchoring each new state, respectively. In both cases, both states could be counted on as being hardcore Democrat states with two Democratic Senators and a legislature dominated overwhelmingly with Democrats.

However, in “Southern California”, a slightly different picture emerges. While Hillary Clinton received more votes than Trump in the counties that would make up this new state, she would have received less than 52% of the vote. Additionally, the Republican candidate for Secretary of State, in 2014, would have won by over 15%. The voter registration, in 2017 is also competitive, with Democrats having 36.8% vs. 34.2 for Republicans, and nearly 29% being 3rd party or unaffiliated.

The new state of “Southern California” would be a true competitive state and likely have at least one Republican Senator and likely a Republican majority in at least one of its legislative houses. Additionally, now freed from the hard-Left pull of the San Francisco bay area, as well as the Democratic vote horde of Los Angeles, this new state of “Southern California” would be far less Leftist in policy and taxes. It is quite plausible that with a more favorable economic climate and relatively more conservative governance, this new “Southern California” could become a “West Arizona” if the new political leadership of this new state do things right.

Heck, even the rump “California” would see a significant slowing of its Left-ward drift due to not being a border state anymore, as well as being free from San Francisco.

White initially, the Democrats would gain from the splitting up of California into three states, one of those new states would be amenable to Republican control and could wrestle seventeen net electoral votes away from the Democrats. It would also mean that the coastal domination of the Democrats could be at an end.

This entry was posted in Elections and tagged Democrats, GOP, Leviathan, Taxes. Bookmark the permalink.