Six Californias: An Analysis of Splitting California Into Six States

A Silicon Valley venture capitalist, Tim Draper, is circulating an initiative measure to split California into six states.  Here we present a quick look at what that would mean politically.

First let us look how the state would be broken up: 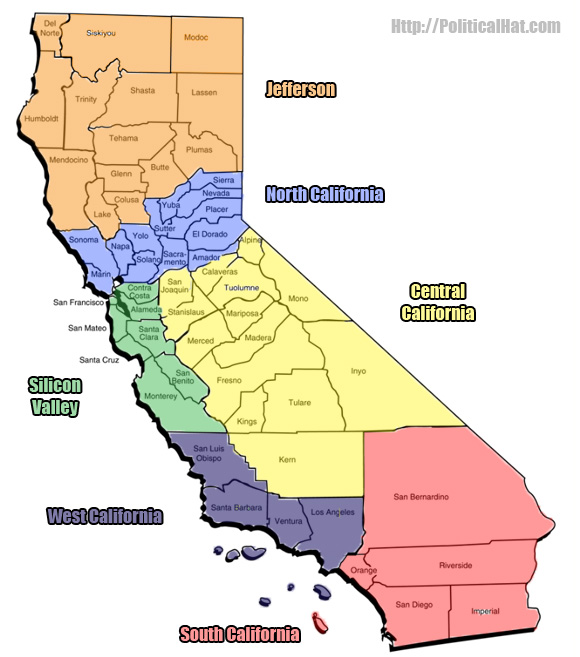 Let us assign House seats by simply taking the current number (53) and assign them according to the percent of the California’s population in each, rounding appropriately, and then assigning the 53rd seat to the state most likely to get it we have:

Thus in each state would have the following electoral votes:

To get a feel for the political situation in each of the new states, we’ll look at two recent elections:  The 2010 Attorney General election, which was a near win for the Republicans with Steve Cooley, and the 2012 Presidential election.  Though Sen. Feinstein received a slightly higher percentage of the vote, we will focus on Obama’s re-election to gauge the impact nationally.

In two of the proposed states, Romney would have won those states, with an additional 11 EV. (States were “Jefferson” and “Central California”)

In a third state, the Republican Cooley would have won, but Obama would have squeaked by by middle-low single digits. (State was “South California,” comprising SoCal outside of L.A.). A truly purple state. It would yield about 17 EV.   This new state would be plurality Republican in registration.

A fourth (“Northern California”) voted for Obama, as well as the Dem in the A.G. race, but the Dem won those counties in a squeaker, making this proposed state a borderline  one that could become purple in the future. In particular, with the correct demographic shift, it could easily go purple (it has liberal coastal elites and more conservative valley/mountain area).

The two states of “Silicon Valley” and “West Calfironia” would be hard core Dem/Communist.

The politics of the states would not remain static, though.  Sacramento is dominated by Bay Area politicians, who are electorally supported by L.A. county.  By confining the insanity to the state of “Silicon Valley,” the rest of the state would become much more conservative (even L.A., which is saying something).  You’d have new states that were friendly to the sane and the conservative.

We could easily see “Southern California” gaining a lot of population due to is moderate to conservative (or at least libertarian-conservative) leanings, in addition to the presence of established infrastructure.

The state of “Northern California” could even be converted to a relatively conservative area if there is enough of an influx — it would contain Napa county and Sonoma county, but be balanced by Placer county and the other mountain/valley counties inland.

The bulk of the farmland, and control of much of the water, would be in the hands of GOP friendly “Central California” and would likely become a beacon for any and all farmers once again.  They would control the water, which would give them a heck of a lot of power.  What would happen to the Owens valley (from which L.A. stole its water), would be… interesting.

Heck, even “West California” would see a significant slowing of its Left-ward drift due to not being a border state anymore, as well as being free from San Francisco.

Aside from “Jefferson”, all other states would get at least one campus of the University of California (UC).

Interestingly, it might prompt the conservative eastern parts of Oregon and even Washington to demand the right to join “Jefferson”…

The break-up of California along the proposed boundaries would result in two Red states, one Purple state, and three Blue states which would range from almost Purple to “Left of Stalin.”