This is not the rape of a piece of Swiss cheese, but the claim that PeTA are making that cheese, a well known tool of oppression, is obtained exclusively from rape…

“As feminists, we’re working to put more women in office and in corner offices. We fight for equal pay, tax-free feminine hygiene products, an end to sexual harassment, funding for women’s sports, and streets safe enough for us to walk alone. We push for strong role models who don’t objectify women on television and in movies. We work to end sex trafficking, slavery, genital mutilation, and ‘honor killings.’ We rail against sexism in all its many forms—except, perhaps, when it comes to what’s on our plates.

“Can food really be sexist? Yes, when it’s the product of imprisonment, rape, reproductive control, kidnapping, and abuse.” 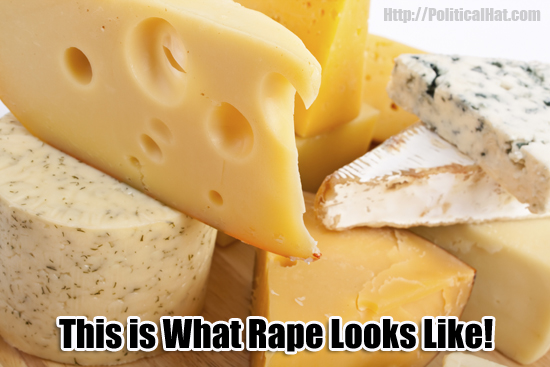 Dairy farming and animal husbandry is not rape, or any of those other things, since cows are not people and don’t have human rights.

The capacity to metabolize lactose well into adulthood is an evolutionary benefit, and dairy farming allows that to be exploited to its full potential.

It’s almost as if PeTA were science deniers or something…

This entry was posted in Progressives and tagged derp, FacePalm, FAIL, War on Women. Bookmark the permalink.

One Response to Cheese Rape