The underage sex slave trade in Rotherham, U.K., thrived due to the city officials and police refusing to abandon their faith in the Politically Correct notion that non-White/non-Christian men were incapable of being rapists. That was not an isolated incident, simply the most infamous.

The former industrial city of Rochdale can now share in that infamy.

“For Lily, the nightmare started at 11-years-old.

“At 15, afters years of abuse, Lily finally went to the cops, mustering the courage to tell her harrowing tale.

“‘It was a male police officer. And he was kind of like, sighing — and had his head in his hands — and just looked really disinterested,’ she told Crime & Investigation.

“In the so-called Rochdale Sex Grooming case, the victims were all white. Their abusers and pimps were all Pakistani.

“And for years, the gang of pedophiles was essentially untouchable because cops and prosecutors feared becoming the target of the modern day version of the scarlet letter: racist.” 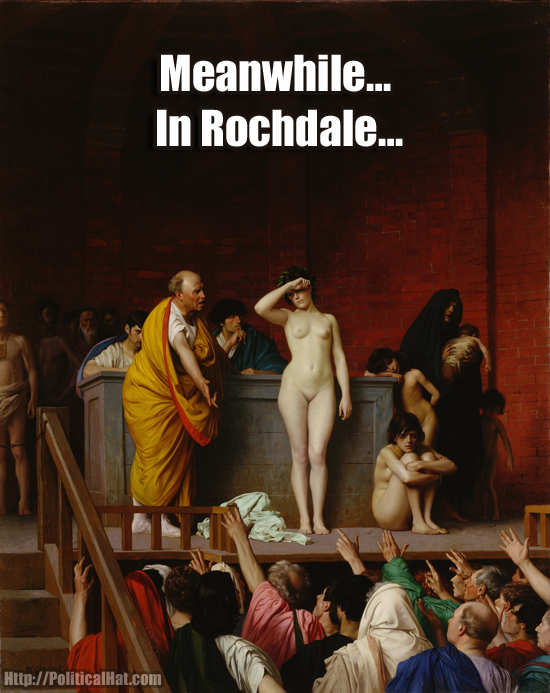 So, what changed? Was it all the White officers growing a conscious and deciding that possibility of being called a “racist” was less morally repugnant that protecting pre-teen girls from being turned into sex slaves to be gang raped?

The Crown Prosecutor who decided to act was an ethnic Pakistani, Nazir Afzal.

“‘My Pakistani heritage helped cut through barriers within the black and minority ethnic communities,’ he said. ‘White professionals’ oversensitivity to political correctness and fear of appearing racist may well have contributed to justice being stalled.'”

This is why it is so important for members of these Pakistani and/or Muslim communities to stand up against this evil, not just to distance themselves from these monsters, but to do what the terminally Politically Correct White Britons can’t: Protect children from rapists.

This entry was posted in Progressives and tagged Europe, Social Justice, War on Women. Bookmark the permalink.