A professor of geology at Brooklyn College was almost fired without ever being told the reason why, let alone by whom. What for? Free speech and triangles, but mostly triangles.

“I teach geology at Brooklyn College, part of the City University of New York (CUNY). And luckily I have tenure, an important protection in case of Kafka-like trials at a PC college. What had I done wrong? See for yourself. Here is the offending phrase from the grading portion of my syllabus: ‘Class deportment, effort etc……. 10% (applied only to select students when appropriate).’

“Can you spot the alleged offense? I bet not. For reasons that escape me too, that phrase was perceived as a prelude to sexual harassment. And the phrase was so clearly problematic to the administration that they directed me to change it.

“As it turns out, my syllabus almost crossed another invisible line of acceptability in the politically correct world at Brooklyn College. Here’s the problematic part:

“‘This classroom is an “unsafe space” for those uncomfortable with viewpoints with which they may disagree: all constitutionally protected speech is welcome.’ I had been using warning triangles sardonically instead of ordinary quote marks when referring to foolish PC terms. All my department chair would say is, ‘The triangles are the problem.’ I never found out what made the triangles a problem. They were ready to act on a problem without saying what the problem was.

“My guess is that some administrator thought the warning triangles were reminiscent of the pink triangles that the Nazis made gays wear. I wonder how long the administrators deliberated before deciding that the clip art street signs I’d included in my syllabus weren’t Nazi symbols.” 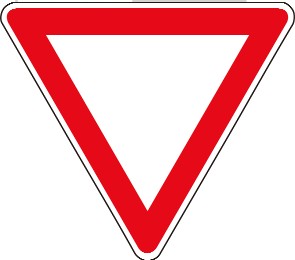 The only reason this professor wasn’t fired without even being told why was because of tenure.

Of course, this could have just been an excuse to fulfill a new New York law “designed to increase the chances of a guilty finding” on college campuses.

One Response to Triangle of Oppression