“Equality” commissions have quickly followed the tracks of their Canadian cousins and become kangaroo courts that serve as judge, jury, and executioner in their quest to stomp out thought-crime against those who do not praise homosexuality or same-sex marriage.

Evidence has now come to light that rather that be “fair” and “impartial”, they are Social Justice crusaders out to find and punish people for lack of sufficient celebration of same-sex marriage:

“Communications between the agency, the Oregon Bureau of Labor and Industries, and the LGBT organization, Basic Rights Oregon, raise questions about potential bias in the state’s decision to charge the Kleins with discrimination for refusing to make a cake for a same-sex wedding.

“Communiations obtained through a public records request show employees of the Oregon Bureau of Labor and Industries—which pursued the case against the Kleins—participating in phone calls, texting, and attending meetings with Basic Rights Oregon, the largest LGBT advocacy group in the state.” 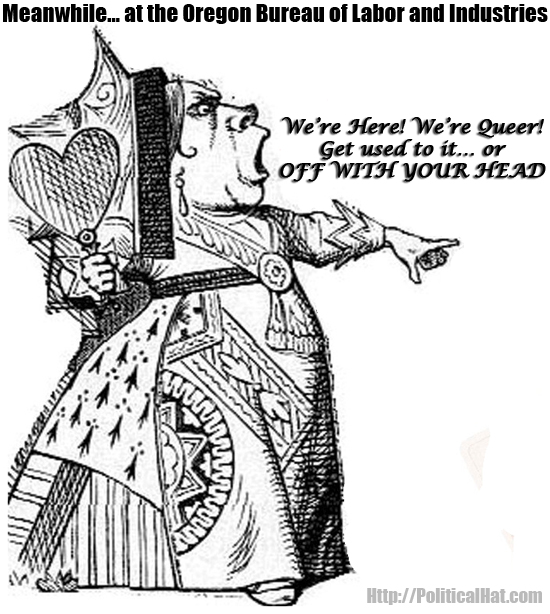 Of note, the bakers refused to bake the cake at a time when same-sex marriage was not legal in Oregon.

But, one might say, isn’t it the job of these quasi-judicial inquisitions to destroy thought criminals, and isn’t their partnering with private organizations hell-bent on “fundamentally transforming” America just plain spiffy?

“State agencies have a duty to represent the best interests of the general public, not the interests of one particular advocacy group. The relationship shown by these communications is inappropriate and raises basic questions about the objectivity, bias, and fairness of this agency and its proceedings.”

This stands in contrast to the discovered communications between the kangaroo court and the pro-SSM bullies:

“Communications between Bureau of Labor and Industries Commissioner Brad Avakian and Basic Rights Oregon, which has actively spoken out against the Kleins, raise questions about whether the commissioner and other agency employees were using the case to benefit a political agenda, and in the process, stripping the Kleins of their right to a fair trial.

“That knowledge dates back to February 2013, when Avakian publicly accused Aaron and Melissa Klein of breaking the law before hearing any evidence.”

We are truly living in the Red Queen’s court…