Posted on September 8, 2015 by The Political Hat

The browser grand Soviet, AKA Mozilla, has already demonstrated their “luv” for “tolerance” for firing Brandon Eich, who dared to commit the sin of agreeing in 2008 with Barack Obama’s position on Gay Marriage at the time. 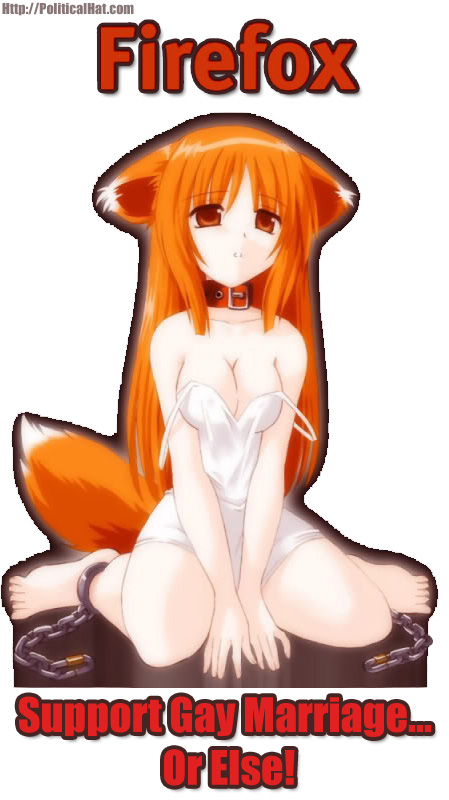 “Frankly everyone was glad to see the back of Christie Koehler. She was batshit insane and permanently offended at everything.

“When she and the rest of her blue-haired nose-pierced asshole feminists are gone, the tech industry will breathe a sigh of relief.”

The response is not surprising:

“‘It’s been brought to our attention that there’s been anonymous postings to Reddit under the handle aoiyama that crossed a line from criticism to hate speech. There’s a lot to suggest that they’re a Mozillian [an employee]. Specifically, when I’m talking about crossing the line from criticism to hate speech, I’m talking about when you start saying that “someone’s kind doesn’t belong here and we’ll all be happy when they’re gone.” If that’s not hate speech, it’s pretty damn close and we’re not going to walk that line as Mozilla. So if, and when, we identify who this person is and if they are an employee, they will be fired. Either way, they are not welcome to continue to participate in the Mozilla project, so if you cross that line, I’m asking you now: please leave, because you’re not welcome.'”

This isn’t “intolerance” of someone due to some immutable characteristic (real or imagined), this is just an expression of dislike against a bunch of insane bullies and a wish to work in a SJW/bully-free environment.