The End of Heterosexuality and the Dismantlement of Gender

Posted on September 9, 2015 by The Political Hat

Radical feminist lesbian, but I repeat myself, Julie Bindel has opened up to the “radfem collective” about her thoughts on destroying heterosexuality and abolishing the “Patriaricial” idea of gender.

The interview has been deleted… but the internet never forgets. 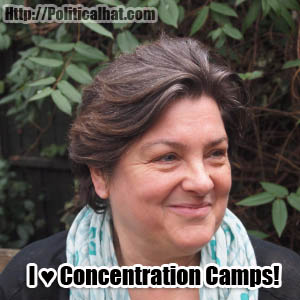 She goes on to denounce male homosexuals as erotisizing “inequality, subordination, pain and dominance”.  It doesn’t matter if you are Pat Robertson, Dan Savage, or “Caitlyn” Jenner… you are still an evil penis person.  Anything short of a lesbian collective is evil:

“So radical feminism saw heterosexuality under patriarchy as massively problematic, because it benefited men and it disadvantaged women. It meant that the family structure was one that had the man at the Head of the household – even if he wasn’t a dinosaur, even if he thought of himself as quite progressive.”

The family structure benefits both men and women.  Each brings the unique aspect of each sex together to benefit, and be benefited by, each other while creating an environment where a child has the benefit of both a mother and a father.  But to the RadFems, men are icky and biological reality is just a social construct.

Unsurprisnly, it would seem that RadFems hate, above all else, Mother Nature:

“We need to stop talking about it like it’s a thing. We need to start laughing at those that pretend that it has somehow replaced biological sex, and stop being afraid of pointing out that the two are completely different and that one actually doesn’t exist outside of male dominance and women’s subordination. Because all gender is, is an imposition of subordination on women, and the opposite of that of course is the dominance of men, who get privilege by being born male, and we get the opposite. So I think we have to just start laughing at it, and not by wearing a tutu and workmen’s boots. But by actually by saying, this thing is actually not real.  “

The differences between the sexes include both physical and actual physiological differences.  While it is true that “gender” as something separate and distinct from biological sex does not exist, gender as an expression of those biological differences does.  Dismissing “gender” is, to the RadFems, an excuse to dismiss maleness as anything other than a creation of some grand Y-chromosomed conspiracy.

Heterosexuality is normal for all dimorphic species with two biological sexes.  This is how such species reproduce.  Of course, RadFems dismiss biological reality and dismiss reproduction as just some male conspiracy:

“[Heterosexuality] won’t, not unless men get their act together, have their power taken from them and behave themselves. I mean, I would actually put them all in some kind of camp where they can all drive around in quad bikes, or bicycles, or white vans. I would give them a choice of vehicles to drive around with, give them no porn, they wouldn’t be able to fight – we would have wardens, of course! Women who want to see their sons or male loved ones would be able to go and visit, or take them out like a library book, and then bring them back. “

Funny how “Women’s liberation” has turned towards Concentration Camps.

This entry was posted in Progressives and tagged Gender, War on Women. Bookmark the permalink.