Posted on February 2, 2015 by The Political Hat

Urban planners remain enamored with a centralized and compact city where the Plebes will be enriched by the culture fed them by the elites (who all have country houses, of course). 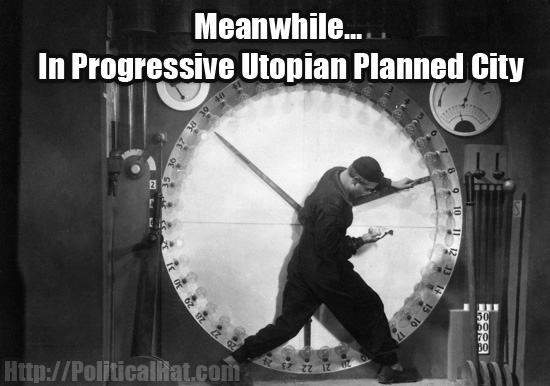 Upon what do they plan their utopias?   Failed Soviet planned cities of course…

“As is sometimes asserted by urbanists today, the new socialist cities were about more than mere economic growth; they were widely posed as a means to develop a new kind of society, one that could make possible the spread of Homo sovieticus (the Soviet man). As one German historian writes, the socialist city was to be a place ‘free of historical burdens, where a new human being was to come into existence, the city and the factory were to be a laboratory of a future society, culture, and way of life’.

“Elements of High Stalinist culture was evident in these cities; the cult of heavy industry, shock worker movement, youth group activity, and the aesthetics of socialist realism. This approach had no room for what in Britain was called “a middle landscape” between countryside and city. Throughout Russia, and much of Eastern Europe, tall apartment blocks were chosen over leafy suburbs. Soviets had no interest in suburbs of any kind because the character of a city ‘is that people live an urban life. And on the edges of the city or outside the city, they live a rural life’. The rural life was exactly what communist leaders hoped their country would get away from, therefore Soviet planners housed residents near industrial sites so they could contribute to their country through state-sponsored work.

“With this assumption, Soviet planners made some logical steps to promote density. They built nurseries and preschools as well as theatre and sports halls within walking distance to worker’s homes.   Communal eating areas were arranged. Also, wide boulevards were crucial for marches and to have a clear path to and from the factory for the workers. The goals of the ‘socialist city’ planners were to not just transform urban planning but human behavior, helping such spaces would breed the ‘urban human’.

“As is common with utopian approaches to cities, problems arose. Rapid development, the speed of construction, the use of night shifts, the long working days, and the inexperience of both workers and management all contributed to frequent technological failures. Contrary to the propaganda, there was a huge gap between the ideal of happy workers thriving in well-managed cities and the reality.”

Shoving people into cities like sardines in a can has been one of the ideals of the Progressive elite (who again, will have country estates).

The only solution is to submit to the state and their elitist planners, the Left declares.  They would take all your money to build an alleged utopia that will give you everything that the Soviets delivered via a vis their promise… to the tune of $90 Trillion Dollars.

It is appealing… to those who think the ideal is the “college experience”.  Of course, the “college experience” of a five year vacation of “finding oneself” and “raising awareness” while working on a collective organic farm can only exist when it is subsidized by eeevil Capitalism.  Yet the Marxist ideal still appeals to idjits.

It is those idjits that will doom the rest of us.  The future is dystopian indeed.