Posted on December 2, 2013 by The Political Hat

The plans of Obama and the Progressive elite to transform America by inhibiting suburban and ex-urban living and propping up urban utopias instead for the sake of “Affirmatively Furthering Fair Housing” has been previously commented on.  However, the urban-obsessed Progressive elite have also been using the fear of immanent climate DOOM to pack people into little urban hovels while enjoying the spiffier urban hip hangouts, which is somehow familiar… 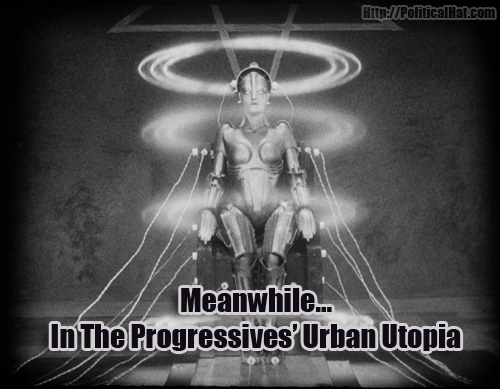 Of course, this ecological DOOM is just an excuse, as urban density in the San Francisco Bay area has increased while people are driving… more:

“The data also show that crowding people together isn’t really effective at reducing greenhouse-gas emissions or addressing other urban concerns. Population densities in the San Francisco-Oakland-San Jose urban areas have already grown by nearly 60 percent since 1990, yet per-capita driving still has increased.”

“Advocates argue that the demand for single-family homes is about to drop as retiring baby boomers and up-and-coming millennials will prefer to live in mixed-use neighborhoods with high densities and easy pedestrian access to stores and entertainment.

“This claim isn’t supported by people’s actual behavior. The vast majority of population growth continues to be in low-density suburbs. Surveys of millennials show that more than three out of four aspire to live in a single-family home with a yard.”

The true “will of the people” is to live in suburban environments where they own their own home and don’t have to share walls with other people, this won’t stop the elitists who want to ride their pristine picnic and nature grounds with slack-jawed yokels.  Their plans continue regardless:

“Currently, 56 percent of households in the nine-county Bay Area live in single-family homes. That number would drop to 48 percent by 2030, under a high-density development blueprint called Plan Bay Area, recently enacted by the Association of Bay Area Governments and the region’s Metropolitan Transportation Commission.

“Even if it’s not without precedent, Plan Bay Area could still be revolutionary because of the rationale behind it. It could help spur a nationwide movement for high-density “transit-oriented” development — in the name of reducing global warming. The federal government has signed on. The Obama administration has told metropolitan areas to include land-use regulations in the transportation plans that federal law requires them to update every five years. Washington is also giving communities “livability grants” aimed at promoting high-density development.”

Livability?  This is no different than shoving a bunch of rats in a cage.  The rabid Left’s delusional utopian visions won’t be inflicted on them, but only on the hoi polloi who will have to “enjoy” being crammed together to the point where even Elijah Baley would feel claustrophobic!