The Haruspices of the IPCC

The climate models that predict doom and destruction are increasingly being proven not just wrong, but spectacularly wrong.  Many of the prophets of apocalyptic destruction are finding it necessary to dial back their prognostications of immanent annihilation. The Nation Academy of Sciences has even had to admit that:

“[G]enuine and important uncertainties remain (e.g., the response of clouds, ecosystems, and the polar regions) and need to be considered in developing scientifically based strategies for societal response to climate change.”

Yet, groups like the IPCC are still reporting that they are “95% certain” that out-of-control climate catastrophe!  How can they have the confidence of a haruspex poking through rooster entrails?  They even admit that their models have “difficulties”:

“The main difficulties are sparse coverage in many observed variables, short time series for observed trends, lack of correlation between observed quantities and projected past or future trends, and systematic errors in the… the ambiguity of possible performance metrics and the difficulty of associating them with predictive skill” 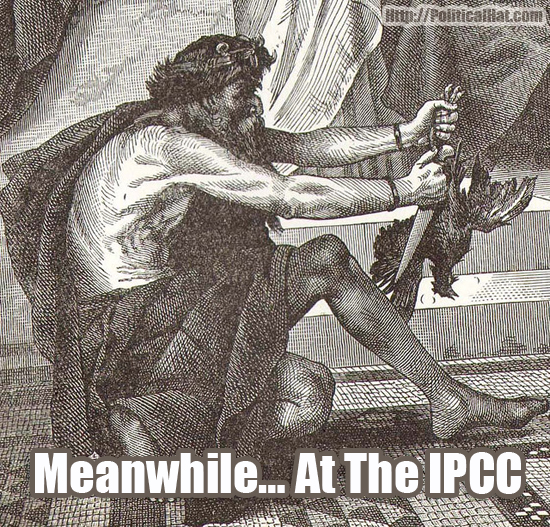 The IPCC even tries to ignore that their predictions were wrong by saying they could never even be right because they were just projections which were pushed as proof that we need to radically alter society to stave off the End Times:

“Projections from previous IPCC assessments can also be directly compared to observations… with the caveat that these projections were not intended to be predictions over the short time scales for which observations are available to date. Unlike shorter lead forecasts, longer-term climate change projections push models into conditions outside the range observed in the historical period used for evaluation.” 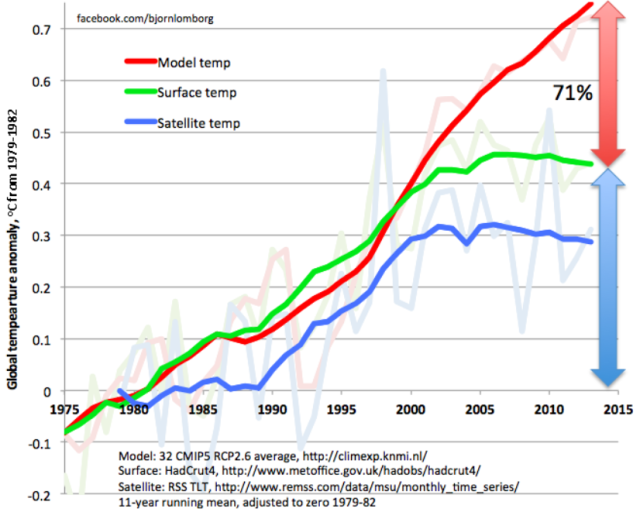 Pictured: A "Projection" that isn't - via Watts Up With That?

So, how can they be “95% certain”?  They can’t even get the same results using the same code on different computers!  Their inaccurate models that don’t actually predict the observable future say so! How do they say so?  Because the scientists who get paid to make divinations say so!  “Climate Science” appears to be the modern say equivalent of a Haruspex divining the future by poking the entrails of a rooster.

And woe to the unbelievers…

This entry was posted in Science and tagged FAIL, Science. Bookmark the permalink.