The Democrats Solution to the Government Shutdown: “Make Life Difficult”

Rather than debate on the merits of the various Republican proposals to keep the government running, Searchlight’s Dim Bulb, Sen. Harry Reid, and Obama have decided to shut it all down, and then use the lapdog media to blame it all on the Republicans.

However, it is not working as well as the planned and they are no swaying people like they though they would.  So what to do?  Why, double down of course, and make people feel the hurt.  They are not only closing Federal parks even when others offer to pay to keep them open, but even trying to shut down private museums and parks:

“The Park Service appears to be closing streets on mere whim and caprice. The rangers even closed the parking lot at Mount Vernon, where the plantation home of George Washington is a favorite tourist destination. That was after they barred the new World War II Memorial on the Mall to veterans of World War II. But the government does not own Mount Vernon; it is privately owned by the Mount Vernon Ladies’ Association. The ladies bought it years ago to preserve it as a national memorial. The feds closed access to the parking lots this week, even though the lots are jointly owned with the Mount Vernon ladies. The rangers are from the government, and they’re only here to help.

“‘It’s a cheap way to deal with the situation,’ an angry Park Service ranger in Washington says of the harassment. ‘We’ve been told to make life as difficult for people as we can. It’s disgusting.'” 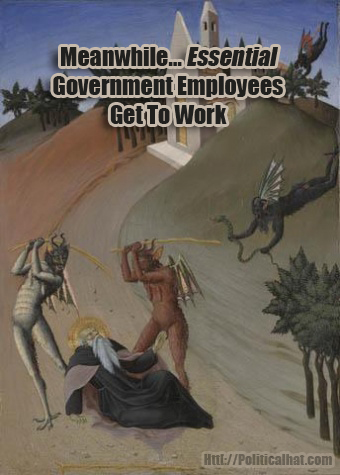 This is working even less well than they planned.  Making people suffer is far from alien to many politicians, but this time people are pushing back.  When an open World War II memorial was closed off (using far more money than simply leaving it open would be), World War II vets stormed the barricades and occupied the park anyway — But then they’re quite good at that sort of thing. This was repeated at the Iwo Jima memorial. These vets are certainly earning the title “greatest generation.”

With the Obama adminsitration even trying to close the ocean itself, only time will tell if they succeed or whether people say enough is enough, and shout out “we’re not gonna take it!”

This entry was posted in Uncategorized and tagged Democrats, FAIL, Mood Music, NVSen. Bookmark the permalink.

One Response to The Democrats Solution to the Government Shutdown: “Make Life Difficult”