Posted on February 3, 2015 by The Political Hat

A rather pathetic whining about just such a class graced the student pages of the Daily Californian. 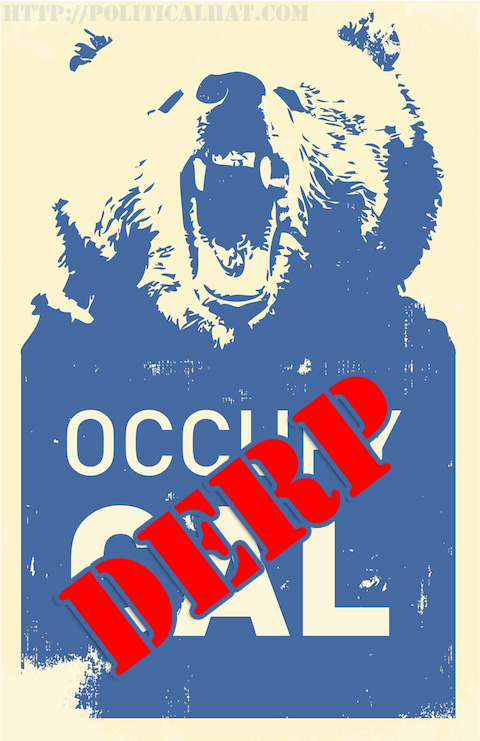 Herein is a frisking of their idiocy.  Admittedly it is mild, but then it disserves but a modicum of mental energy…

“We are calling for an occupation of syllabi in the social sciences and humanities.”

Dissent must be crushed, after all.

“This call to action was instigated by our experience last semester as students in an upper-division course on classical social theory. Grades were based primarily on multiple-choice quizzes on assigned readings. The course syllabus employed a standardized canon of theory that began with Plato and Aristotle, then jumped to modern philosophers: Hobbes, Locke, Hegel, Marx, Weber and Foucault, all of whom are white men. The syllabus did not include a single woman or person of color.”

“We have major concerns about social theory courses in which white men are the only authors assigned. These courses pretend that a minuscule fraction of humanity — economically privileged white males from five imperial countries (England, France, Germany, Italy and the United States) — are the only people to produce valid knowledge about the world. This is absurd. The white male syllabus excludes all knowledge produced outside this standardized canon, silencing the perspectives of the other 99 percent of humanity.”

First of all, the Greek philosophers weren’t from the United States.  They lived millennia before that.  But hey, let’s not let reality intrude…

America is part of Western Civilization.  Western Civilization had been racially White for the most part.  It just makes sense that the focus would be on philosophers who impacted Western Civilization, rather than those who don’t.  But then the point of the entire class is to focus in on that, and thus necessarily exclude those outside the classical Western schools of though.

“The white male canon is not sufficient for theorizing the lives of marginalized people. None of the thinkers we studied in this course had a robust analysis of gender or racial oppression.”

The typical mode of humanity has been “us” against “them”.  Racial politics, based on Darwinian superiority did not exist way back when.  Nor did the vast majority of philosophers,  be they of Western Civilization or not, accept the modern and aberrant theories of “gender.”

“They did not even engage with the enduring legacies of European colonial expansion, the enslavement of black people and the genocide of indigenous people in the Americas.”

As compared with the imperial expansion of the Incaa, Aztecs, Chinese, Muslim caliphates, &c. &c.?  The enslavement of black people was an African institution well before the Portuguese ever visited Africa south of Cabo Bojador.  It was White civilizations that ended slavery, though.  The indigenous people in the Americas was full of people’s happy to conquer and enslave others.  The Spanish and Portuguese, at least, did not require a blood sacrifice to their God.

“Mentions of race and gender in the white male canon are at best incomplete and at worst racist and sexist. We were required to read Hegel on the ‘Oriental realm’ and Marx on the ‘Asiatic mode of production,’ but not a single author from Asia.”

“We were required to read Weber on the patriarchy, but not a single feminist author. The standardized canon is obsolete: Any introduction to social theory that aims to be relevant to today’s problems must, at the very least, address gender and racial oppression.”

How many “feminist” authors are worth reading?

“The exclusions on the syllabus were mirrored in the classroom. Although the professor said he wanted to make the theory relevant to present issues, the class was out of touch with the majority of students’ lives. The lectures often incorporated current events, yet none of the examples engaged critically with gender or race. The professor even failed to mention the Ferguson events, even though he lectured about prisons, normalizing discourse and the carceral archipelago in Foucault’s ‘Discipline and Punish’ the day after the grand jury decision on the murder of Michael Brown.”

In other words, how dare the Professor express a thought that hadn’t been pre-approved!

“Furthermore, the classroom environment felt so hostile to women, people of color, queer folks and other marginalized subjects that it was difficult for us to focus on the course material. Sometimes, we were so uncomfortable that we had to leave the classroom in the middle of lecture. For example, when lecturing on Marx’s idea of the ‘natural division of labor between men and women,’ the professor attributed some intellectual merit to this idea because men and women are biologically distinct from each other, because women give birth while men do not.”

How horrible that the Professor mention the biological fact that men are not women, nor women men!

“One student asked, ‘What about trans* people?’ to which the professor retorted, ‘There will always be exceptions.’ Then, laughing, the professor teased, ‘We may all be transgender in the future.” Although one might be tempted to dismiss these remarks as a harmless attempt at humor, mocking trans* people and calling them ‘exceptions’ is unacceptable.'”

As compared to referring to “trans people” as freaks?

“This was not an isolated incident. In another lecture, the professor cited the highly racialized case of the Hurricane Katrina fallout as an example of people in a poor, brutish, Hobbesian ‘state of nature.'”

How dare anyone mention a philosophy that denies the intrinsic nature of utopia (sans the “Kyriarchy”, of course).

“Moreover, he talked about Native American traditions and beliefs as examples of illogical and irrational superstition. All of these incidents are connected to a larger systemic problem with inclusion in classroom spaces at UC Berkeley. In the 2013 campus climate survey, 26 percent of respondents reported that they had personally experienced exclusionary, intimidating, offensive and/or hostile conduct. The survey also found that marginalized students, such as trans* and black students, had experienced exclusionary conduct at rates much higher than average.'”

Silly Professor, doesn’t he know that the only people it is appropriate to belittle are straight White cis-gendered males?

“We need to create classroom spaces where everyone can feel welcome.”

“We recommend that instructors attend workshops on inclusivity in the classroom, such as those offered by the Gender Equity Resource Center. Beyond that, we must restructure the way social theory is taught.”

“We must dismantle the tyranny of the white male syllabus. We must demand the inclusion of women, people of color and LGBTQ* authors on our curricula. We must break, systematically and explicitly, the epistemological assumptions on which this exclusionary education rests.”

Oh, we must include everyone except for straight White cis-gendered males… unless they can be used to smash the “Kyriarchy”?

“So, if you have taken classes in the social sciences and humanities, we challenge you: Count the readings authored by white males and those authored by the majority of humanity. Then ask yourself: Are your identities and the identities of people you love reflected on these syllabi? Whose perspectives and life experiences are excluded? Is it really worth it to accumulate debt for such an epistemically poor education?”

Because there is little more important to the teaching of Western Civilization than those who would condemn and stand in opposition to it?