Duck Dynasty and the Intolerance of the Left

The intolerance of those who preach “tolerance” has been well established, with many examples to prove the point.  Two articles concerning this by Mark Steyn and Erick Erickson point out that the “suspension” of Phil Robertson of Duck Dynasty by A&E is but another example of this. 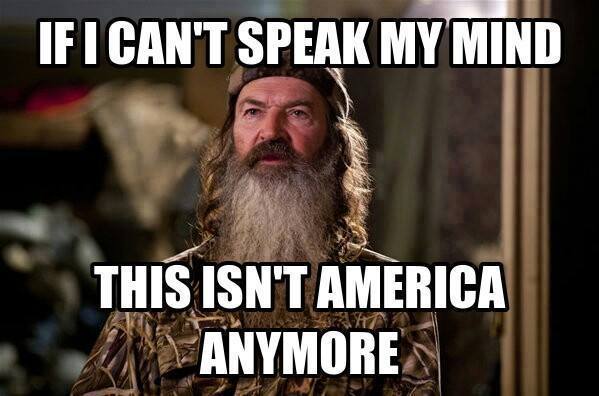 When it comes to pornographic art, including art of a homoerotic nature such as the infamous Robert Maplethorpe, complaining about tax dollars being used was considered “intolerance” and people were told to just shut up if they don’t like it.  This “tolerance” turns our to not be mutual, as Erickson lays it out clearly and bluntly:

“Phil Robertson is an evangelical Christian. He called sin illogical, stated his preference for women, and lumped gays in with other sinners such as drunks and terrorists. It is that last one that has really caused all the problems. Nevermind that Phil Robertson said Christians are to love everyone and not judge anyone. Nevermind he made it clear he was not condemning anyone. He just stated his belief.

“He did not make anyone convert. He did not attack anyone. He did not harass anyone. He answered a question. But the kids at GLAAD, now dominant, have gone from demanding tolerance for all to silencing good people.

“Christians were once told they did not have to look or listen. The militant gay rights movement and the secular left will not abide by their own prescription. Those who dissent or think differently must be silenced.”

The word “tolerance” has come to mean any utterance or deed that strengthens or even just maintains the Cultural Marxists’ new “Superstructure,” and the death of the civic heritage of Western Civilization.

The irony is that those who are declared to be “intolerant” have themselves shown to be paragons of tolerance, in the true sense of the word, while their “tolerance” advocating enemies have become what they declare others to be.

Mark Stein points this out clearly:

“As Christian bakers ordered to provide wedding cakes for gay nuptials and many others well understand, America’s much-vaunted “freedom of religion” is dwindling down to something you can exercise behind closed doors in the privacy of your own abode or at a specialist venue for those of such tastes for an hour or so on Sunday morning, but when you enter the public square you have to leave your faith back home hanging in the closet.”

The Duck Dynasty kerfuffle has just proved once again that those who screech for “tolerance” the loudest are themselves the most intolerant of all.

This entry was posted in Progressives and tagged Affirmative Action, Kyriarchy, Social Justice. Bookmark the permalink.

One Response to Duck Dynasty and the Intolerance of the Left