Posted on November 1, 2013 by The Political Hat

Yet another example of political propagandizing under the umbrella of the “Common Core” curricula now declares that everyone must obey the dictates of the government, especially when the “well-being” of the collective trump the freedom of the individual:

This is a homework assignment from a friend of mine's 3rd grade son. This is indoctrination. pic.twitter.com/jPN1IwgqKh

The first four problems set up the President (i.e. Obama) as a tireless hardworking (on the golf course) decider and determiner of fairness:  When people disagree, he will make choices that affect everyone and make things “fair.”

The fifth ignores history and reality.  The American Revolution was fought because the commands of the British government officials were not only not obeyed, but opposed with arms.  This can also be seen by the Battle of Athens.  But that fifth questions goes beyond that, there are many ways to oppose and refuse to obey the government which are non-violent.

Perhaps the most perfidious is the sixth problem that declares that the collective outweighs the freedom of the individual.  Combines with the previous five problems and a situation is presented wherein a decider of fairness makes absolute determinations that subordinates the wishes of the individual to what the President believes in the well-being of the collective “people.”  And since said decider is simply the avatar of the collective, he/she/it can be nothing but “fair.”

The supremacy of the collective, with an enlightened leader who discerns the Volonté Générale like a Haruspex picking through rooster guts, is not an original idea, but one from a philosophy that defined itself as being ethical and where the collective was everything:

“Anti-individualistic, the Fascist conception of life stresses the importance of the State and accepts the individual only in so far as his interests coincide with those of the State, which stands for the conscience and the universal, will of man as a historic entity'” 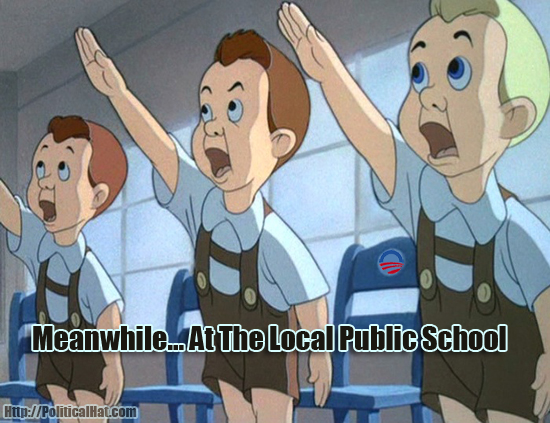 “The keystone of the Fascist doctrine is its conception of the State, of its essence, its functions, and its aims. For Fascism the State is absolute, individuals and groups relative. Individuals and groups are admissible in so far as they come within the State. Instead of directing the game and guiding the material and moral progress of the community, the liberal State restricts its activities to recording results. The  Fascist  State  is wide awake and has a will of its own. For this reason it can be described as ‘ethical’.”

This entry was posted in Education, Progressives and tagged Leviathan, Obama, SCoaMF. Bookmark the permalink.