When Bureaucrats Condemning Innocent People to Death is Considered Praiseworthy

An Canadian court in Ontario ruled that doctors can not withhold treatment from a patient if the patient’s family does not want it.  However, the court ruled that a quasi-judicial board of bureaucrats can overrule the family!  Canada has Death Panels, and this make some people happy.

“In Ontario… the provincial legislature decided in 1996 to create a quasijudicial tribunal, the Consent and Capacity Board, to make these life-and-death decisions more quickly. If a patient’s substitute decision maker withholds consent, then doctors may apply to the board—comprised of lawyers, mental health professionals, and community members—for a determination that the proposed treatment is in the patient’s best interest. If so, the board has the power to consent on the patient’s behalf.” 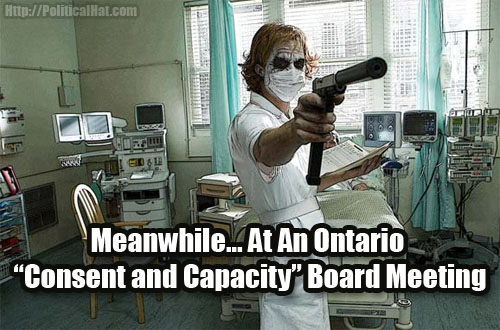 This is particularly frightening when one considered that Canada has a singl-payer socialized health system where the state rations care.  Jackaninny Adam Goldenberg over at Slate considers Canada’s Death Panels to be necessary and laudable:

“In Canada, with our single-payer health care system, Rasouli’s situation has a very public bottom line: Should taxpayers foot the bill for his family’s indefinite goodbye?”

Why should taxpayers foot the bill for abortions of choice, or enough contraceptives to sleep with all of Lichtenstein (twice)?   This is the ultimate outcome of “free” socialized services and the inevitable rationing:  Government big enough to give you everything you want is powerful enough to take it all away, including your very life.

As Walter Hudson over at PJMedia notes:

“Everything wrong with the Left’s view of economics, morality, and healthcare in particular can be observed in that passage. Goldenberg’s analysis ignores any consideration of individual rights.”

In such a system, you do not have a fundamental right to life.  Indeed, you have no fundamental rights at all, since your “rights” and “freedom” are but a dispensation of the government.  This is in stark contrast with the attitude in the United States:

“When taxpayers provide only a finite number of acute care beds in public hospitals, a patient whose life has all but ended, but whose family insists on keeping her on life support, is occupying precious space that might otherwise house a patient whose best years are still ahead.

“The incentives in the American health care system point in the opposite direction. In the United States, keeping an all-but-dead patient alive on life support in a hospital bed generates income for the hospital, for as long as its bills get paid.”

In the Canadian system, if  your life is deemed unworthy in the opinion of others, it becomes worth less than zero.  This is also what makes the American system so great: The emphasis is on keeping people alive rather then killing them off in order to subsidize someone else’s sex life.

This entry was posted in Healthcare, Progressives and tagged Leviathan, RIP, Social Justice. Bookmark the permalink.