The 1987 miniseries Amerika depicted life in the United States after a bloodless takeover engineered by the Soviet Union.  A scene, near the end, depicts a young American boy in a Komsomol style uniform wax poetically about the wonders of the new socialist state and how the pre-soviet America was “a lie”:

Despite the Soviet Union being no more, that future where youth are shaped into the “New Soviet Person” is coming to pass, and doing so under the guise of “common core.”

We’ve already seen how students are taught to eviscerate the Bill of Rights, to become foot soldier for “social justice,” and to view America as being an inherently unjust scheme by rich straight White cis-gendered males which is only being overthrown by the march forward of enlightened Leftist ideology.

Another example can be seen in a test question from a Common Core aligned textbook that asks the student to find the pronoun in the following sentence:

“Rich people are too callous and greedy to realize they are destroying the middle class.” 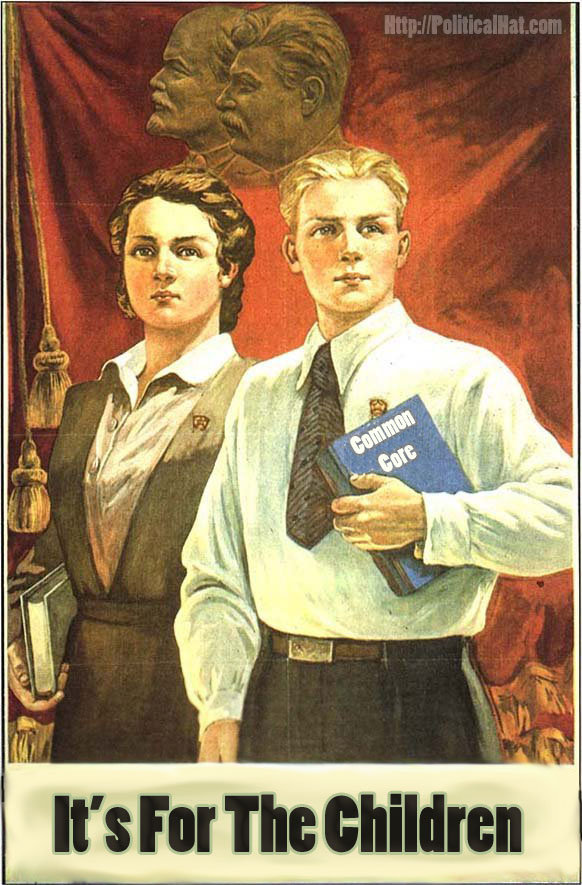 While Common Core is an erstwhile change in methodology, it eschews actual expertise in the subject matter:

“[T]he validation process [was] ‘invalid’ and that the English Language Arts committee included no English professors or high-school English teachers. The body was there to rubber stamp the already written standards… [and] the only content expert on the panel, refused to sign off on it.”

In another example, 2nd graders are given a “lesson plan aimed at teaching second-graders about ‘equality’ by highlighting labor issues.”

“As part of the plan, students spend a week reading ‘Harvesting Hope,’ a book about Chavez written by children’s author Kathleen Krull, and then discuss what the lesson plan calls ‘scales of fairness,’ which compare the living conditions of farm workers to that of land owners.

“‘Fairness and equality exist when the scales are balanced,’ teachers are prompted to instruct the students. They are then supposed to ask the students whether both sides, as presented in the plan, are equal, providing a correct answer of ‘no’ in the teachers’ guides.”

This is a clear case of only a Leftist view taught as being correct.  Incorrect political thinking and dissent will be punished in the schools.

Is it any wonder, then, that America’s youth could be anything but like that boy in the scene from Amerika?

Even the realm of pure mathematics, for which it ought to be impossible to fall pray to this type of idiocy, nonetheless is:

“Under Common Core, for example, students don’t learn standard algorithm – think traditional addition or subtraction – until fourth grade now. Prior to that, kids learn ‘regrouping.’ Instead of stacking 17 on top of 32 and adding the ones column, then the tens column; students group 10 with 30 and 7 with 2 horizontally. Then they add 40 and 9 to come to the answer.

“[T]he SBAC pilot test asked her child for the methodology he would use to find the answer, not for the answer to the problem itself.”

This creates a situation where students are trained to regurgitate certain methods as being the “correct” methods, in other words, only their way of thinking is deemed correct.  This also has the consequence of dulling the students minds and their creativity:

Additionally, the teachers don’t make up the lesson plans, but work off scripts that they are not supposed to vary from. In effect:

“Scripting lessons is based on several false assumptions about teaching. They include:

“Put together, this presents a narrow and shallow view of teaching and learning.”

Perhaps not, but it is a broad and expansive view of indoctrinating children, in order to create the NEW New Soviet Person.