It has been previously noted that the Obama Administration is going out of the way to make people suffer during the government shutdown, even to the point of wasting time and money to do it.

They have reached a new low: A sandcastle contest in San Fransisco was shutdown, despite the fact that the beach “normally has no lifeguards, no rangers, is permanently open to the public, and requires no funds for day-to-day operations” 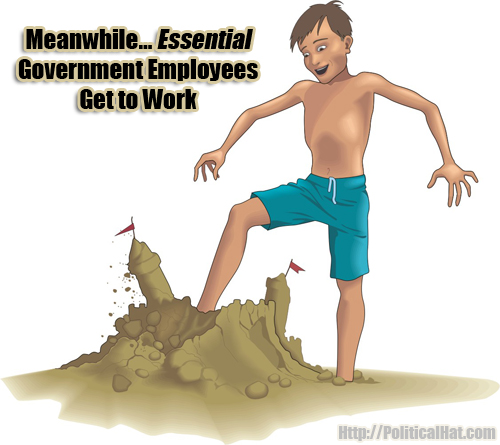 Further, there would be punishments meted out if they dared to build sandcastles anyway:

“‘We were told that we could be fined for trespassing and that our permit was no longer valid,’ the letter [that notified participants of the shutdown] said. ‘We were also told that our event could be shut down by park rangers or by San Francisco police.'”

Under Obama’s orders, the Federal government is basically threatening to kick down children’s sandcastles.  How sad and pathetic that they have become the stereotypical beach bully.

This entry was posted in Progressives and tagged Democrats, Leviathan, Mood Music, Obama. Bookmark the permalink.

One Response to Obama Administration Kicking Sand In Our Face