Barilla: A Paragon of Tolerance

Guido Barilla, the chairman of Barilla Pasta has stated that their commercials will only show traditional families with a mother in a special and irreplaceable role within a family.

Do you believe that a family with a mother and father should be promoted as a good thing?  If so you are an evil H8er who oppresses gay people with heteronormative subjugation!

An Italian Gay rights group, Equality Italia, has declared the portrayal of a traditional family as an “offensive provocation” because Signore Barilla will “never do (a commercial) with a homosexual family, not for lack of respect but because we don’t agree with them. Ours is a classic family where the woman plays a fundamental role.” 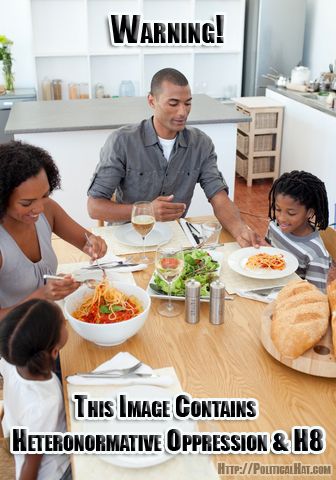 Signore Barilla is happy to leave it at that, with gay people can live their own lives and have their own relationships or even an imitation of a traditional family.  They are free to eat or not eat Barilla pasta, as far as Signore Barilla is concerned, but he is also free to project the type of traditional family with a mother that he feels is important and worth portraying in high esteem.

This is what is called Tolerance.  He is quite happy to let people live their own lives however they want.  He has gone beyond mere tolerance, since Signore Barilla actually supports legalizing same sex marriage!

Unsurprisingly, it is those who are condemning Barilla who are the intolerance ones:

“Rich Ferraro of GLAAD said his mom, Linda, had emptied her cupboard of the company’s products.

“‘I was raised on Barilla,’ Ferraro said. ‘My mom told me that this morning she looked in her cabinets and they were still filled with Barilla pasta, and after I told her what Mr. Barilla said, she said she was going to be dumping out all those boxes of pasta and switching brands.’

“Even Mayor Thomas Freeman, of upstate Avon — where Barilla operates one of two US plants — said he ‘totally’ disagreed with the remarks.

“‘I feel sorry for Mr. Barilla that that’s what he feels,’ Freeman said.

“But the two-term Democrat said he hoped anger at the company didn’t damage sales too much, noting that the Avon plant had brought 140 jobs to the village of 3,700.”

The word “tolerance” no longer means to tolerate someone or something.  It has been mutated in the war of words to mean mandatory affirmation.  It comes from the ideology where simply being neutral supports oppression, and that only be proactively tearing down society and its innate oppression and discrimination, can non-Straight individuals free themselves from heteronormative social mores.

In reality, Signore Barilla is a paragon of tolerance who has actually gone beyond that.  That is not enough for the rabid Left, for they care not for tolerance, but only the complete destruction of society, so that they may remake it in their own deluded vision.

This entry was posted in Progressives and tagged Europe, Gender, Kyriarchy, Social Justice. Bookmark the permalink.

2 Responses to Barilla: A Paragon of Tolerance