As has often been said, if one wishes to win the future, one must win the hearts and minds of the children.  From the Frankfurt School to modern college campuses, trained indoctrinators have been emerging for a century or more whose sole job is to make sure that “your child belongs to [them] already” before the parents even notice.

The Progressive left have been largly successful in using education as an excuse to misinform and twist the minds of of what they see as “their” children, in order to perpetuate their hateful and deluded vision of a utopian nightmare.  By the time that parents and the rest of society notice, the Progressive left have already permanently won the narrative.

The Education Action Group provides just such an example.  The “Rethinking Schools” organization has been using mathematics as an excuse to push their “social justice” agenda.  In effect, this means that “[a]ccording to [radical educator Paulo] Freire’s theory, students must understand how the world’s systems work to oppress the masses before they can reform those systems.” 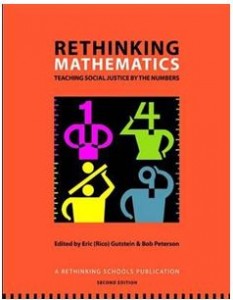 Examples of this sick and racist indoctrination include how the Mercator map projection is part of an insidious plot by lying White oppressors:

“Eric (Rico) Gutstein – a ‘Rethinking’ editor and occasional public school teacher – recounts how his students reacted to a lesson about the math (and perceived subtle racism) behind mapmaking.

“After a class discussion about the Mercator map – which, for various and legitimate reasons, distorts the size of the continents – one student had an epiphany about why the map is so popular in schools.

“‘I guess that’s because they wanted to teach (that) all Americans (are) superior and that all whites are better and superior than us (brown or lightly toasted, hardly white and Mexican),’ wrote Elena, in a reflective essay. ‘We were always taught that we were a minority and didn’t deserve anything.’

“Another student, Marisol, said the Mercator map lesson ‘makes me think what other wrong information we have been given since childhood. It makes you doubt your social studies book, history written by the white people.’

“Talk about literally ‘reading the world’ in a left-wing way.

“In a chapter titled, ‘Whose Community Is This?’ Gutstein discusses a lesson he taught high school seniors about Big Banks, subprime mortgages and minority communities.

“After the lesson was over, one student concluded ‘black and brown’ communities need to set aside their differences and ‘unite’ to ‘fight the bigger people out there.'”

To the sane and rations people out there: Educate the children before the Progressives have a chance to fully indoctrinate them!