Why Does EBONY Magazine Think all Blacks are Druggie Thugs?

EBONY Magazine are declaring that all Black individuals are gay-bashing druggie thugs.  While this isn’t what they intended to do, it is what they have ended up doing.  They are putting out four different covers of various hoodie-wearing Black male celebrities with their hoodie-wearing sons, as well as one with Trayvon’s family.

EBONY intended to suggest that society treats all Blacks like it treated the “innocent” Trayvon Martin.  Unfortunately, since in reality Trayvon was a gay-bashing druggie thug, this association just furthers the despicable stereotype of all Blacks as druggie thugs.

But then, the editors of EBONY probably don’t care about Trayvon, but only the money a little controversy could bring, particularly the controversy about White people boycotting EBONY… which was created by EBONY in order to get press and make money.

Perhaps a more accurate cover of EBONY might be more illuminating: 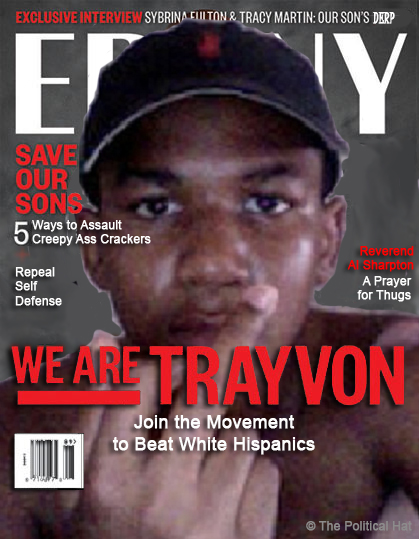 This entry was posted in Uncategorized and tagged FAIL, Kyriarchy, Social Justice. Bookmark the permalink.