One of the long-standing attack on private property rights, and on human rights in general, has been the move to grant “rights” to nature. Now, there is a move to make the “violation” of such rights punishable by the International Criminal Court (ICC) and put it on the same footing as genocide. In other words, it makes “unlawful or wanton acts committed with knowledge that there is a substantial likelihood of severe and widespread or long-term damage to the environment being caused by those acts” the equivalent of what the Nazi regime did.

“Legal experts from across the globe have drawn up a “historic” definition of ecocide, intended to be adopted by the international criminal court to prosecute the most egregious offences against the environment.

“The draft law, unveiled on Tuesday, defines ecocide as “unlawful or wanton acts committed with knowledge that there is a substantial likelihood of severe and widespread or long-term damage to the environment being caused by those acts”.

“The Stop Ecocide Foundation initiative comes amid concerns that not enough is being done to tackle the climate and ecological crisis.

“If adopted by the ICC’s members, it would become just the fifth offence the court prosecutes – alongside war crimes, crimes against humanity, genocide and the crime of aggression – and the first new international crime since the 1940s when Nazi leaders were prosecuted at the Nuremberg trials.” 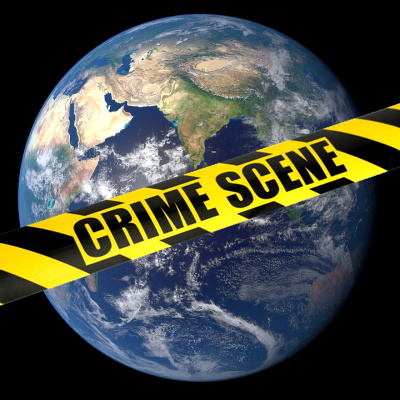 And the intent is overtly totalitarian in nature.

“Prof Philippe Sands QC, of University College London, who co-chaired the panel that spent the past six months hammering out the definition, said: ‘The four other crimes all focus exclusively on the wellbeing of human beings. This one of course does that but it introduces a new non-anthropocentric approach, namely putting the environment at the heart of international law, and so that is original and innovative.

“‘For me the single most important thing about this initiative is that it’s part of that broader process of changing public consciousness, recognising that we are in a relationship with our environment, we are dependent for our wellbeing on the wellbeing of the environment and that we have to use various instruments, political, diplomatic but also legal to achieve the protection of the environment.’”

The only crime they care about is dissent.

This entry was posted in Progressives and tagged Communism, Green, Leviathan, Social Justice. Bookmark the permalink.