“A subtle form of trolling involving ‘bad-faith’ questions. You disingenuously frame your conversation as a sincere request to be enlightened, placing the burden of educating you entirely on the other party. If your bait is successful, the other party may engage, painstakingly laying out their logic and evidence in the false hope of helping someone learn. In fact you are attempting to harass or waste the time of the other party, and have no intention of truly entertaining their point of view. Instead, you react to each piece of information by misinterpreting it or requesting further clarification, ad nauseum.” 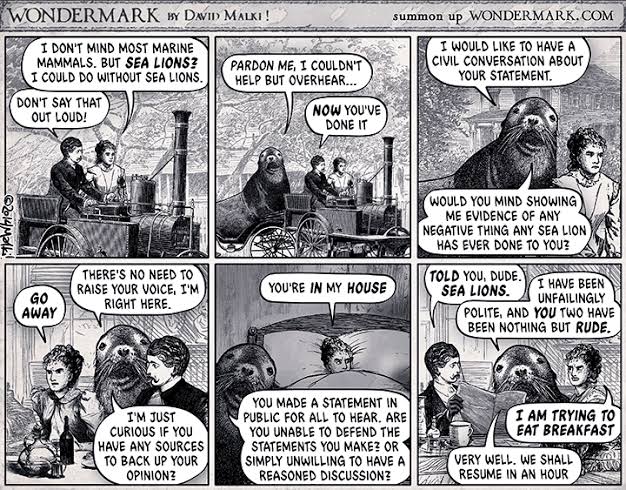 An example recently presented itself to your humble author on Twitter.

Often anything that does not fit the narrative is labeled as propaganda. Have anything cogent that isn’t a generic label to add to the discourse? I’ve read some of his stuff, I’m all ears…

Note the dead give-away that this is Sealioning: The honest-looking call for evidence while providing nothing in response to a statement.

Well, the question was answered with an example, and replied to with another question.

I would not say I noticed that but perhaps an example, happy to look it up for context. Preferably something material.

If one is going to make a claim, one ought to know of examples to back it up, as your humble author did.

so in other words, your entire opinion on this, isn't based on anything you've actually read and analyzed but what you've been told to think by … a Joe McCarthy apologist. That checks out.

Notice how even though they expect the person they are Sealioning to not only have read all relevant and related works and be able to write a dissertation on the spot, they never find it necessary to read writings to the contrary, or even to argue a single point from the writings that you yourself are expected to read in order to even posit an opinion.

Not even linked evidence is enough, despite use of actual quotations and explanations for why those quotes are bunk, all of which is evidence to the initial doubted statement.

Ironically enough, the “Sealion” then did what your humble author was accused of: An ad hominem statement against someone, and in this case both an attack on your humble author but a tarring of the late Sen. “Tailgunner Joe” McCarthy.

McCarthy, like many of our current leaders, had no shame. He was reckless and dangerous and in the name of ideals, ruined lives and undermined the fabric or a free society. Sound familiar?

A true parrot. You know, plagiarism is the highest form of flattery, right?I see what you like in it though. I can vibe with it.

“Sealions” are nothing but trolls, and ought to be belittled as such.

One Response to A Sea-Lion In The Twitter Wild