Posted on September 5, 2018 by The Political Hat

The Netherlands, the global capital of homicide-based “medicine“, has so normalized suicide that even involuntary suicide is considered medically acceptable. But the “conditions” that are to be treated by death are not limited to physical ailments, but to any and all psychiatric conditions.

“In January a young Dutch woman drank poison supplied by a doctor and lay down to die. Euthanasia and doctor-assisted suicide are legal in the Netherlands, so hers was a death sanctioned by the state. But Aurelia Brouwers was not terminally ill – she was allowed to end her life on account of her psychiatric illness.

“During those last weeks, she spent her time with loved ones, doing craftwork and riding her bike in Deventer, the city she adored. She also visited the crematorium – the place she had chosen for her own funeral service.”

There was a time that a mentally ill person who tried to kill themselves would be stopped and given treatment. Not in the Netherlands, where many “doctors” believe that “when people apply for euthanasia on psychiatric grounds, in some cases they will kill themselves if they don’t get it. In her view, they should be regarded as people with terminal illnesses.” When psychological problems are treated as if they were physical ailments, and “incurable” physical ailments are increasingly routinely treated by just offing the patient, it becomes inevitable that the easiest and most cost effective way to treat someone with psychological issues in a socialized healthcare system is to just kill them off. A bit of a conflict of interest for the “doctors” to, rather than help their patients cope, are complicit in getting their patients to die.

Perhaps more frightening, is how a life-long psychiatric problem can, and is, being equated with life-long medical conditions such as diabetes! After all, if you can legally get a person with psychiatric issues killed, then why not someone, including children, with diabetes to die as well?

There were plenty of warning signs that this wasn’t as “well-considered” as Dutch law (on paper) requires approved suicides to be:

“During her last two weeks of life, Aurelia was often distressed and had self-harmed.

“‘I’m stuck in my own body, my own head, and I just want to be free,’ she said. ‘I have never been happy – I don’t know the concept of happiness.’

“‘She was really not as stable during the day,’ remembers Sander Paulus, the RTL Nieuws journalist who spent much of that last fortnight with her. ‘You just felt there was a lot of pressure in her head. She didn’t speak that well any more – except when we talked about euthanasia. She was very clear on that.’

“But does clarity mean someone has the mental capacity to choose death over life? According to Dutch law, a doctor must be satisfied a patient’s request for euthanasia is, ‘voluntary and well-considered’.”

Here final moments can but underscore that she wasn’t thinking right:

“In the RTL Nieuws documentary, she has a last conversation with Sander Paulus, as she holds the small, sealed medicine bottle.

“‘This is the drink,’ she says. ‘I know it tastes bitter, so I’m just going to drink it down. And then I’m going to sleep.’

“Sander Paulus asks her if she has any doubts.

“‘I hope you find what you’re looking for,’ he says.

“‘I definitely will,’ is Aurelia’s reply.”

Perhaps the most disturbing thing is this screenshot of the now-dead woman hugging a stuffed-animal companion, which clearly helped her mentally far more than the entire Dutch medical establishment. The need and attachment to a stuffed animal is a cry of help. Small children, traumatized adults, and those who are incapable of deciding for themselves are the most attached to that stuffed animal that will abandon them, harm them, or betray them. 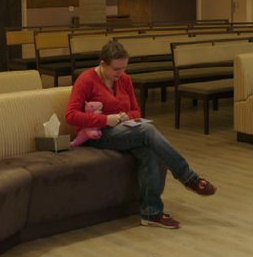 This woman was abandoned, harmed and betrayed.

If only the other human being could have been to venerable.