Once upon a time, pronouns like “he” and “her” once referred to individuals identifiable as “men” and “women” based on (unusually) obvious and objective criteria, much in the same way a person can point at a tree and know it is a tree and bay so saying state an objective truth that another person can agree is so. 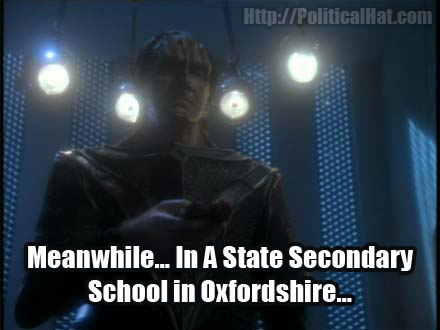 But in this brave new world of ours, it is impossible to refer to someone as a “he” or “she” without “assuming their gender”, and such assumptions are now cause for punishment.

“A teacher has been suspended and could face the sack after he ‘accidentally’ called a transgender pupil a ‘girl’ in class when the student identifies as a boy.

“Joshua Sutcliffe, 27, who teaches maths at a state secondary school in Oxfordshire, said ‘Well done girls’ to the teenager and a friend when he spotted them working hard.

“He apologised when corrected by the pupil, but six weeks later he was suspended from teaching after the pupil’s mother lodged a complaint.

“Following an investigation, he has been summoned to a formal disciplinary hearing this week to face misconduct charges for ‘misgendering’.”

In a world were people were tolerant, this teacher would be kindly informed that “he” and “her” do not refer to males and females, as it used to and still for the vast majority of the English speaking world still does, but to some subjective feelz that has appropriated the English language for totalitarian and insidious reasons that put Newspeak to shame.

Perhaps the solution, in order to avoid having to lie and agree with this brave new worldview, is to just not use pronouns.

Nope, you will be made to care.

“However, he has admitted that, as a Christian, he avoided using male pronouns such as ‘he’ and ‘him’.

“He believed this was consistent with the school’s code of conduct and equality policies to show respect and tolerance, and he said he had encountered no problems with this.

“He added, however, that he did not feel that he should be made to use the pronouns ‘he’ or ‘him’ and that to force him to do so was a breach of his human rights.

“The investigation concluded that the ‘misgendering’ of the pupil and ‘avoidance of using gendered pronouns contravenes the school’s code of conduct with regard to demonstrating an awareness of sexual and cultural diversity of students and use of insensitive comments towards young people’ and ‘the use of religious comments in maths lessons demonstrates a failure to comply with school policies.’”

Mr. Sutcliffe is a pastor in an evangelical church who believes that marriage is between a man and a woman. If Mr. Sutcliffe were an Imam in a fundamentalist Mosque, it is doubtful that he’d be facing even a peep from the school authorities. Heck, if he were a Muslim (especially one of Pakistani origin), the school would probably not raise a peep if he was pimping out this confused girl on the streets.

Perhaps the former chairman of the (formerly) Conservative Party made the most sense:

But then, that would make too much sense…

This entry was posted in Education, Progressives and tagged DOOM, Europe, Gender, Leviathan. Bookmark the permalink.