An initiative proposal in California would, if it were to be verified for the ballot and pass, abolish the direct election of members of the state Assembly and state Senate, to replace them with delegates from “working committees”. According to Ballotpedia: “Election officials reported that 794,204 unverified signatures were submitted, as of November 8, 2017. A total of 585,407 valid signatures is required.”

At first this would seem to be more “democratic” in a Leftist view in that one couldn’t directly “buy” a legislator, especially when the delegate to the “Working Committee” must be chosen from amongst the “neighborhood representatives”, who presumably being so much closer to their communities, are magically immune from machine politics and financial influence of entrenched political parties and interests.

However, all this does is protect those parties and interests who have entrenched themselves not only from “outside influences” but from dissenters from within who dare to stand up against the political machines. Indeed, this would help insure that no legislature can run an insurgent campaign against interests, and instead are slaves to those interests who, through the control of the “neighborhood representatives” could replace them on a whim at any time, which would be easier to achieve than with a current recall of legislators via collecting enough signatures of voters

Additionally, it is questionable whether this new arrangement would be a “republican form of government” as required by the Constitution. Even the Federal government has one body (the House of Representatives) directly chosen by the voters. The indirect election is similar to how the U.S. Senate used to be chosen before the 17th Amendment, though the fact that “Federal” styling of state legislative houses has been stricken down by the courts (even as modeled under the current system) for the past half-century puts doubts that such a similar approach could work.

This set-up could also allow a minority of “neighborhood representatives” statewide to control absolute majorities in each legislative chamber due to redistricting, just as much as it would with direct voting now. In this case, though, the actual representatives would be in the majority yet the minority’s delegate receive a majority in their respective “Working Committee”.

Perhaps most disturbing is how this is clearly modeled on how Soviets and Anarcho-Syndicalist communes are arraigned. Local groups, those cases, get together and choose delegates (often with an imperative mandate and recallability), to the next level up of governing. While not as nestled as a Russian doll, the overall scheme is similar. Though organizing the base councils by economic roll or working affiliation, the cultural Marxist propensity to intersectionality and dividing people up into a myriad of groups based on race, sexuality, gender, &c. would clearly be a goal of California’s Left and could be implemented de facto if not de jour. 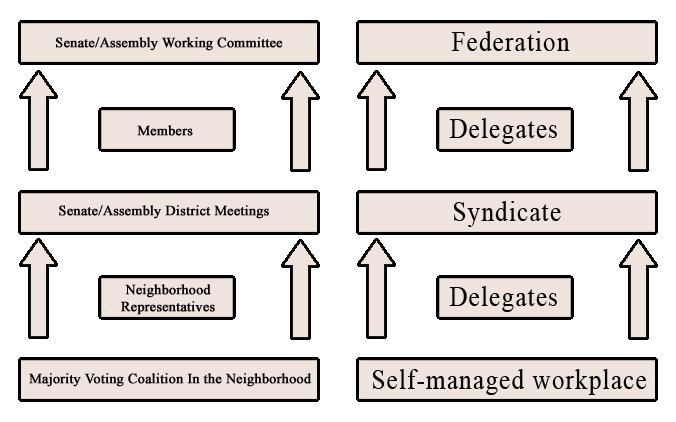 A comparison of the proposed “Working Committee” structure for the California Legislature ( left) and the structure of federated Anarcho-Syndicalist communes (right).

While not a perfect analog, it is a critical intermediary towards that goal of creating actual Soviets. And like those fabled Soviets in the Soviet Union, the promise of “democracy” and “freedom from corruption/control” will be just as much of a joke as it was during the reign of the Communist despots who controlled Russia and far too many other nations.

The text of the proposed measure:

This entry was posted in Elections, Progressives and tagged Communism, Leviathan. Bookmark the permalink.

One Response to California Legislature to go Full Soviet Commune