It’s that time again. Yes, that time when California’s clock stops on a reprieve from the status quo insanity thanks to Gov. Jerry “Moonbeam” Brown’s “moment of clarity” (as an alcoholic would call it). 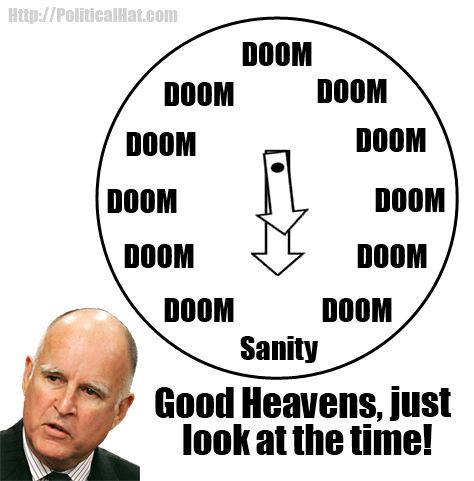 Surprisingly, Gov. Moonbeam vetoes a law that would have enshrined the campus Star Chambers and their Kangaroo Courts in California’s tripartite post-secondary education system. From his veto message for SB 169:

“Since this law was enacted, however, thoughtful legal minds have increasingly questioned whether federal and state actions to prevent and redress sexual harassment and assault – well-intentioned as they are – have also unintentionally resulted in some colleges’ failure to uphold due process for accused students. Depriving any student of higher education opportunities should not be done lightly, or out of fear of losing state or federal funding.

“Given the strong state of our laws already, I am not prepared to codify additional requirements in reaction to a shifting federal landscape, when we haven’t yet ascertained the full impact of what we recently enacted. We have no insight into how many formal investigations result in expulsion, what circumstances lead to expulsion, or whether there is disproportionate impact on race or ethnicity. We may need more statutory requirements than what this bill contemplates. We may need fewer . Or still yet, we may need simply to fine tune what we have.”

Gov. Moonbeam is (finally) termed out and California will have the chance to elect a hard-core Leftist without any of the mental or emotional aversion that Moonbeam had to have when he first ran for office about half-a-century ago.

Demonstrating that a stopped clock is right twice a day, Gov. Moonbeam vetoed an anti-Trump bill that would have required release of tax returns. From his veto message for SB 149:

“This bill requires any candidate for president to disclose five years of his or her income tax returns before their name can be placed on California’s primary election ballot.

“Although tax returns are by law confidential, many presidential candidates have voluntarily released them. This bill is a response to President Trump’s refusal to release his returns during the last election.

“While I recognize the political attractiveness-even the merits-of getting President Trump ‘s tax returns, I worry about the political perils of individual states seeking to regulate presidential elections in this manner. First, it may not be constitutional. Second, it sets a “slippery slope” precedent. Today we require tax returns, but what would be next? Five years of health records? A certified birth certificate? High school report cards? And will these requirements vary depending on which political party is in power?”