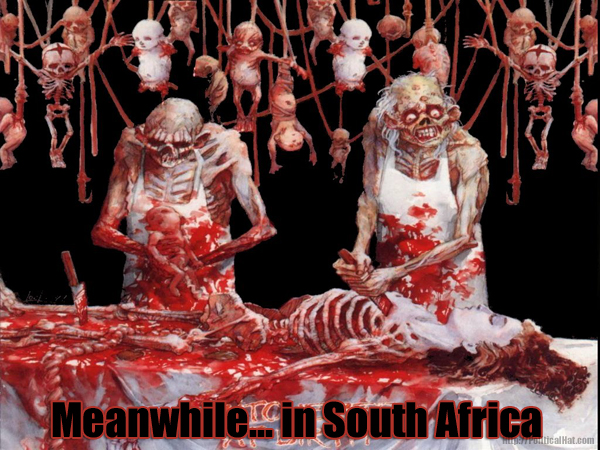 The concept of “decolonizing” is all the rage in the woke social justice paradise of South Africa, with the pursuit of the purge of all ideas of Western Civilization such as science, medicine, and now the taboo against cannibalism:

“A community meeting following the arrest of four Estcourt men for allegedly killing a person and eating human flesh saw hundreds of residents allegedly confess to having eaten human body parts procured from one of the accused.

“The four men, Nino Mbatha (32), Sthembiso Sithole (31), Lindokuhle Masondo (32) and Lungisani Magubane (30), appeared in the Estcourt Magistrate’s Court on Monday on charges of murder and conspiracy.

“This after one of the four men allegedly walked into the Estcourt police station on Friday, holding human body parts and confessed to being “tired of eating human flesh”. When he was questioned, he produced part of a human leg and a hand. Further investigation led police to a house in the Rensburgdrift area in Estcourt where they were met with a foul smell, and more human remains were found.

“KwaZulu-Natal police spokesperson Colonel Thembeka Mbhele said on Friday that one of the accused, also an nyanga (traditional healer), was arrested in Amangwe area where more body parts were found.

“It has been alleged that the men raped, killed and cut up the body of a woman, which they then consumed.”

Ah, the pure innocence of a civilization bereft of those icky Western taboos…

This entry was posted in Progressives and tagged DOOM, RIP, WTF. Bookmark the permalink.

One Response to Decolonizing the Cannibal