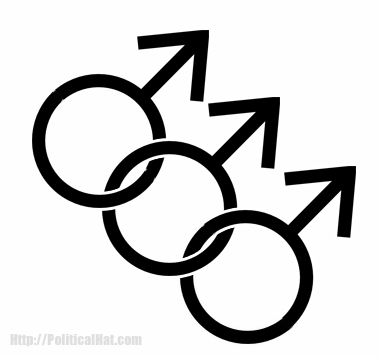 Only after recently legalizing Same-Sex Marriages, Columbia has smashed the duo-normative oppression of the two-person family core unit (i.e. the “Diarchy“) and is now recognizing a three member “thruple” of three men:

“Three gay men say they have gained legal recognition as the first ‘polyamorous family’ in Colombia, where same-sex marriages were legalized last year.

“Actor Victor Hugo Prada and his two partners, sports instructor John Alejandro Rodriguez and journalist Manuel Jose Bermudez, have signed legal papers with a solicitor in the city of Medellin, establishing them as a family unit with inheritance rights.

“‘We wanted to validate our household… and our rights, because we had no solid legal basis establishing us as a family,’ said one of the men, Prada, in a video published by Colombian media on Monday.”

Columbia isn’t even the first to recognize three member domestic family units, and it is doubtful that they’ll be the last. After all, as had been previously noted:

“Once the idea that one’s biological sex was irrelevant to marriage, did anyone really think that the number of people involved would remain so sacrosanct, particularly since polygamy has been widespread throughout human history while true same-sex marriage is virtually unknown?”

This entry was posted in Progressives and tagged DOOM, Gender, Lulz, WTF. Bookmark the permalink.