Posted on November 8, 2014 by The Political Hat

Previously, three lesbians “married” each other, smashing the duo-normative oppressive diarchy of Same-Sex Marriage proponents who insist on marriage being defined as the union of two persons.  Now, a man comes out of the polyamorous closet to defend forming a “thruple” with two other men:

“My least favorite part of being in a thruple might just be the word ‘thruple’, which sounds like a small bird puking. I’ve auditioned other words in conversations: troika (too fascist); trinity (too holy); and triple threat (which would work better if we were an actor, a singer, and a dancer instead of a writer, a costume artist, and a set designer.). But nothing’s stuck.

“Uniformly, the important people in our lives have been great about our unique relationship: I’ve been welcomed with open arms by the friends and families of my partners (which is all the more impressive considering that they were together for 10 years before I met them). My mother asked only two questions: ‘Are you all “intimate” at the same time?’ and ‘Do you all sleep in the same bed?’.” 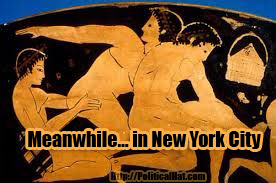 “Once the idea that one’s biological sex was irrelevant to marriage, did anyone really think that the number of people involved would remain so sacrosanct, particularly since polygamy has been widespread throughout human history while true same-sex marriage is virtually unknown?”

This entry was posted in Progressives and tagged FacePalm, FAIL, Social Justice. Bookmark the permalink.