There is nothing more political these days than cakes.

The newest controversial statement that at least one baker wouldn’t touch?

A birthday cake that has written upon it “Make America Great Again”. 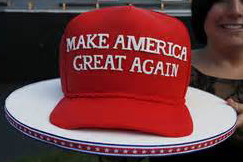 That’s right, a pro-Trump cake was turned down:

“It reads, ‘Just left Albertsons. The woman behind the cake counter just refused to make me a birthday cake because I wanted Trump 2016 on it. Did that really just happen.’

“When she and  her Mom went to order her cake at Albertson’s on East Texas Street in Bossier City, they weren’t expecting the reaction they got.

“‘We just need an American flag cake with Trump 2016 on it, and right when I said Trump the lady just (makes face) kinda Trump? And she was like I can make you a flag cake but I’m not going to write Trump on it,’ explained [teenager McKenzie] Gill.

“Gill says they decided to take their order elsewhere, and notified store officials.

“‘It’s your job, we’re not really going for your opinion on what you think of the candidates we were just wanting Trump 2016 on the cake.’ “

The excuse they gave was… copyright infringement:

“We apologize to our customer in Bossier City for the situation regarding the cake that was requested. Our Bakery staff member misunderstood the training provided regarding copyrighted phrases, and incorrectly informed the customer we could not fulfill her request. We would be happy to provide the cake as the customer requested.”

This comes across as a made up excuse, as Jazz Shaw over at HotAir notes:

“My guess – particularly when you take the description of the employee’s reaction into account – is that the family ran into a liberal at the store who really hates Trump and refused to decorate the cake as the customer wished. Once the news broke out, the store needed to cover their tracks quickly to avoid a lawsuit, so they went with the lack of training excuse.”

Pro-tip: If you want to sell carbohydrate rich food, go into microbrewing…

This entry was posted in Progressives and tagged GOP, Social Justice. Bookmark the permalink.

2 Responses to Denying the Cake