Massachusetts and the Established Church of Transgenderism

Iowa has already declared that any church that welcomes non-members to celebrate the congregations faith must surrender their 1st Amendment rights and accepts the state’s own tenants of the social justice faith and abolish the gender binary in their own church.

Did anyone really think that Massachusetts wouldn’t get in on that action?

Massachusetts will require that ” churches must acknowledge transgender ideology or practice their doctrine on human sexuality in secret — putting Christianity in the closet” under their “Gender Identity Guidance” document.

“The guidance specifically mentions churches as falling under the ‘public accommodation’ restrictions against ‘discrimination’ on the basis of gender identity: ‘Even a church could be seen as a place of public accommodation if it holds a secular event, such as a spaghetti supper, that is open to the general public,’ the MCAD explained.

“The restrictions are massive. Any ‘public accommodation’ must allow patrons to use men’s or women’s restrooms — and locker rooms and changing rooms — ‘consistent with their gender identity.’ Such places must also ‘use names, pronouns, and gender-related terms appropriate to employee’s stated gender identity in communications with employee and with others.’

“These are not small asks for churches, Christian schools, and other organizations which operate on Christian principles.”

Not only will churches be required to let men into the girls room, but any religious facility with a changing rooms must allow grown men to be nude and lathered up with pre-pubescent children.  Heck, a church will be punished for daring to call a man a man, or a woman a woman! 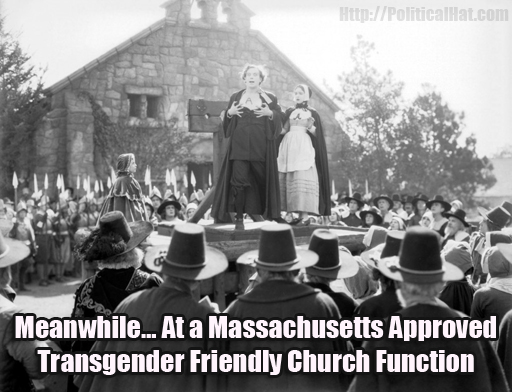 It only applies to “secular events”… which can be narrowly read as anything that has a secular aspect in addition to a religious aspect.

Clearly, you can practice your faith and believe whatever you want… in the darkened closet of your own private residence… alone.

After all, no one is forcing you to preach openly, or organize and form a church using the laws others with more politically correct thinking have available to them.  ‘Tis but a Hobson’s Choice.

It’s not, this strange argument goes, discrimination to discriminate between beliefs or expressed religious belief, or expressed speech, if the state isn’t forcing you openly express your belief or organize with others to spread your belief.

Further, much like the law in New York that punishes businesses if a customer doesn’t use another customers preferred gender pronouns, churches can be punished if their parishioners don’t tote the state’s politically correct line!

Even the Bible might be banned, or at least censored.  Unpossible, one might say?  It’s already happened in Canada.

It would seem that the “faith” of transgenderism being undeniable has been established in Massachusetts as the official state religion… and a mandated one at that.

The “Gender Identity Guidance” document can be read below:

One Response to Massachusetts and the Established Church of Transgenderism