Such is the “study” by a newly minted Ph.D. in “Ethnic Studies” at the University of Oregon, one Angie Morrill.

While the abstract does not fully delve into the lunacy of the full paper “Time Traveling Dogs (and Other Native Feminist Ways to Defy Dislocations)”, it is suggestive of the insanity to come:

“In this article, I analyze a painting by Modoc/Klamath artist Peggy Ball through a Native feminist reading methodology. The painting, Vanport, is named after a city that disappeared in a flood in 1948. The artist survived that flood, and displacement as did thousands of others. The painting is a rememory map of dislocations and hauntings and disappearances. The painting remaps gentrified dislocations, telling stories that focus on the relationship of the present to the past and the past to the future. The painting itself is a Native feminist practice. The travel to places gone, to places that will reappear again; by people gone as well as by people presently alive; into times that existed, that never existed, that will exist again; to times made contemporaneous by time traveling dogs; with people co-present through desire—at the heart of all this time travel is recognition and survivance.”

As is usual, such academic papers are so filled with rambling incoherence, that a word for word fisking risks permanent insanity by the reader.  However, there are plenty of highlights worth noting and belittling.

“A Native feminist reading practice is reading survivancefrom a place of survivance. Anishinaabe writer and scholar Gerald Vizenor coined survivance to describe Indigenous creative approaches to life beyond genocide, beyond the bareness of survival. Survivance is ‘an intergenerational connection to an individual and collective sense of presence and resistance in personal experience . . . and particularly through stories'” … “For this article, I define Native feminisms as the academic and activist practices and theories of Native women and others working actively against settler colonialism and heteropatriarchy and toward decolonization, recognition and revitalization of Native women and communities. It is a methodology that attends to the transhistorical feminist labor of bearing an Indigenous future into existence out of a genocidal present. It is a methodology that involves reading against disappearance; it involves reading futures yet in store for Native lives.”

In otherwords, in order to fight against The White Man™, the author takes historical facts (and faux facts) and opinions, and mixes that up with speculative fiction and current anti-White academic opinion to create greater “truth” that transcends reality itself.

She then makes it clear that such a rigorous academics study is all about feelz:

“I begin with a discussion of Dian Million’s (2013) ‘felt theory’ because I define a Native feminist reading practice as something felt, as deep recognition that goes beyond the literal.”

And off course these feelz are all about making White people uncomfortable:

“The danger lies in unsettling settler innocence, in creating conditions that allow for recognizing one another and presenting alternative histories to “read” the past differently. That is, our voices are dangerous to the settler nation, and thus are dangerous to ourselves as we face the likely violence of being silenced again.”

The seriousness of her work can best be summed up when she states:

“Much of my scholarship is about locating home, surviving dispossession, claiming space, and listening to ghosts.”

It’s like an even more Politically Correct version of the all-female Ghostbusters remake!

The crux of her paper is a critique of a painting by Peggy Bell, which can be seen below, which the author describes thusly: 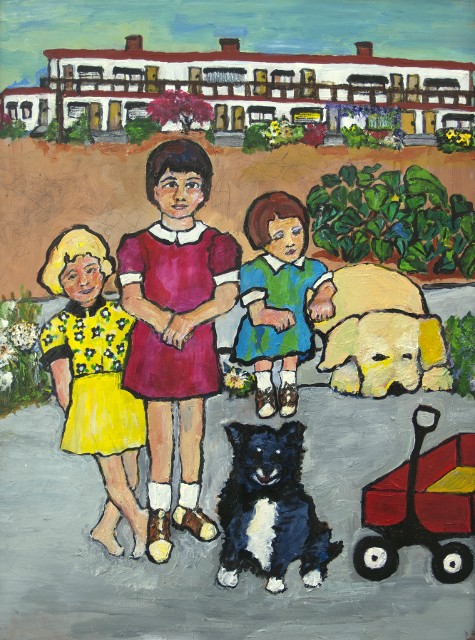 “In this painting, three sisters are standing at the edge of the street, some distance in front of the distinctive Vanport wooden apartments.3 The girls are Peggy and her sisters. The oldest sister, Evelyn is standing next to her youngest sister Debbie, who is barefoot. Peggy Ball sits on the sidewalk next to her large yellow dog. The painting plays with time. Three Ball siblings lived in Vanport, but they were Evelyn, Peggy, and Woody. Woody, the youngest at the time, was a baby. Debbie Ball was born in 1951 in Portland and never lived in Vanport. But this painting is not about representing an historical truth. The black dog that sits next to Evelyn is Satch, her beloved companion who died in 1990. The yellow dog that Peggy rests against is Roy Rogers, King of the Cowboys, her yellow Labrador who died in 2006. As an artist and a Native feminist, Peggy Ball gives these children their favorite pets and the company of their favorite sister, Debbie, who passed on too soon in 1980. As time travelers, they can be co-present with one another in a disappeared place ‘where it happened'”.