The City of Oakland, California, having solved all other problems while transforming itself into an eternal utopia [insert /sarcasm tag here], has decided to ban coal from the city.  Oh, not just mining, but the sheer presence of it!

“The Oakland City Council voted Monday 7-0 to approve a coal ban ordinance, which would keep coal from being exported from the city.”

While this may seem as yet another silly local ordinance, Oakland remains a major port facility, and this ban effectively stops coal from Utah from being shipped to Asian markets.

How many of these same whiners who supported the coal ban, which literally effects international and interstate commerce, happily invoke the EPA to fine and sue people for building a pond on their own property?

Methinks that come Christmas-time, Santa Claus won’t be abiding by the coal ban when it comes to the city councilors… 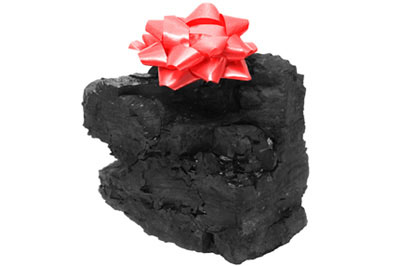 To make matters worse for the city, there was already a signed contract regarding the coal:

“But a spokesperson for the coal industry sees it differently. ‘The city has no legal right to go back on a signed contract, which is has with the developer and secondly to begin cherry picking commodities that it doesn’t happen to like today,’ Oakland Bulk and Oversized Terminal spokesperson Larry Kamer said.

“The proposed bulk terminal would have been right next to the Bay Bridge toll plaza. Officials said safer commodities could be processed instead and Oakland could put a dent in climate change. “If coal is not shipped from Oakland it’s not likely to be shipped from anywhere on the West Coast,” Public Health Institute spokesperson Linda Rudolph said.”

Funny how those who happily invoke the interstate (and international) commerce clause of the Constitution to give the Federal government unlimited power, somehow think that a local entity can block real international and interstate commerce on a whim.

This entry was posted in Progressives and tagged Christmas, Democrats, Economy. Bookmark the permalink.

One Response to Oakland Declares War on Coal